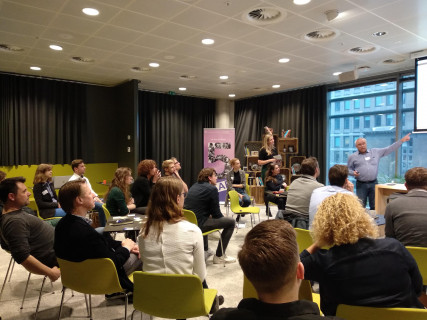 Jeroen Kraaijenbrink gave a masterclass about the collaborative business modeling method. This is a tool to reach a joint business model with various stakeholders and is the result of a European program (SURF Pop Up). Partners applied the methodology and made a collaborative business model canvas. They made a canvas for the De Bretten area, a green zone in the west of Amsterdam which is under pressure because of an increase of houses and people, and for realising an upcycle center, a center that replaces a traditional dumping ground, in the north of Amsterdam. 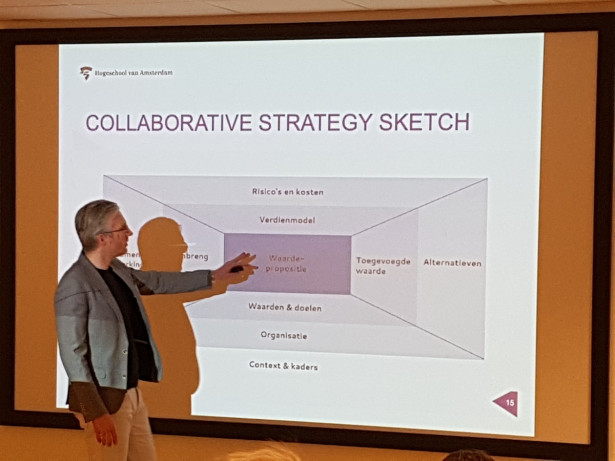 Marie Morel (researcher Metropolitan Issues) gave insights in the field of community management. What questions should you answer to successfully organize participation? What does it mean to make residents part of the project and your business model? And what do the roles of participants look like? 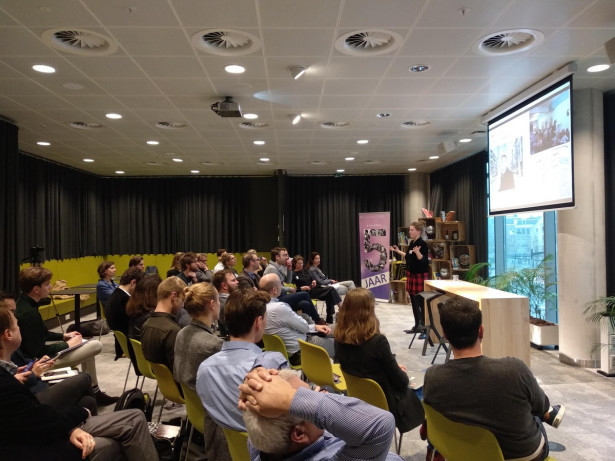 Willem van Winden (Professor of Urban Economics) talks about the issues related to upscaling. Why do projects fail to scale up? What do they encounter? Are there any tips and tricks? There are some reasons for projects to stay in a pilot phase: clear ownership is often lacking and for project implementation and upscaling, other people are needed. Upscaling should be an important topic, already in the early stage of a project. 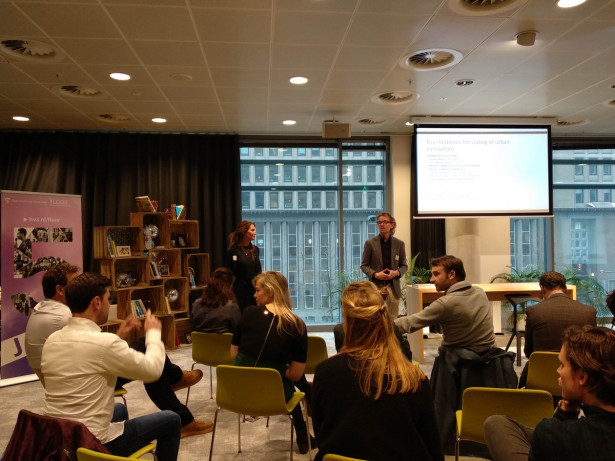 PostNL and Arcadis have jointly started a project to work towards a more adaptive city. A city in which accessibility, quality of life and sustainability are improved by using traffic data. Following feedback from the previous demo day, they have shifted the focus from safety around elementary schools to other transport movements. Arcadis mapped various busy areas in Amsterdam and wants to collect more data to expand the model. Matthijs explains: ‘PostNL has a new perspective on logistics in the city. We want to reduce congestion, noise and CO₂ emissions. In 2025 we want an emission-free city center. To achieve this, we need more companies that contribute.’ 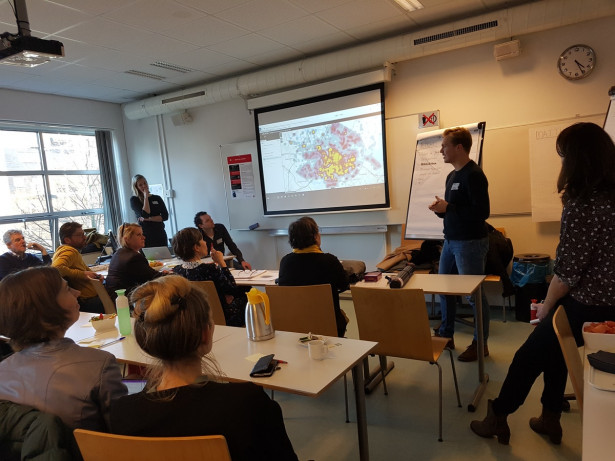 Photo: Matthijs Handlogten and Arcadis' visualization of traffic in Amsterdam

Sustainable logistics with a hub
Large organizations such as the municipality, educational institutions and corporates cause many logistical movements in cities because they have to be provided with all kinds of goods and services. Think of the purchase of office supplies, catering, maintenance, construction works and the waste collection. Buyers can play an important role in organizing logistics more efficiently, smarter and cleaner. For example, the HvA and UvA encourage suppliers to supply goods via a hub. Via electric transport, parcels are delivered on the campuses and delivery frequencies have been lowered. Susanne Balm of the HvA calls on members of Amsterdam Smart City to use this purchasing power.

Criteria for local energy initiatives
Nicholas Been, trainee at Amsterdam Smart City is doing a research on how bottom-up energy initiatives were established and how they organize themselves. He also wants to know what these initiatives need to better cooperate with the municipality. With regard to the second issue, he is working on a list of criteria that local initiatives must meet for efficient and effective cooperation. During the demo day, suggestions for criteria were given. For example, having specific expertise and skills and having a good understanding of the frameworks with which the municipality works. The results of Nicholas’ research are posted on amsterdamsmartcity.com.

Daan Groenink pitched the digital perimeter, a collaboration between Johan Cruijff ArenA, the police and the City of Amsterdam. The project revolves around the responsible digital use of cameras and sensors during major events, to increase safety. During the European Championship of 2020, UEFA expects physical fences to guarantee safety, but is this the best way? And if we use digital tools, do we always have to tell visitors that they are being filmed? Other partners remarked that a physical fence is a good solution, we always have to tell people that they are being filmed and followed in a certain area, but maybe we don't have disclose the exact location of the camera. Many people asked for a discussion of this topic and the ethical dilemmas in more detail. In March, we discussed this matter with Amsterdammers in Pakhuis de Zwijger.

NEMO explains the CATALYST project, which they are carrying out together with, among others, the Athena Institute of VU University Amsterdam and TU Delft. Residents are asked about their ideas about the increasing digitization and technology. CATALYST has had conversations in the streets, markets and in community centers. The final phase of the project is near. CATALYST will interview various public and private parties. The results will be shared during an event in the summer.

Calls for partners and community

Smart City Expo in New York
Florentine from Amsterdam Trade organizes various international missions to the US. You can join us to the Smart City Expo in New York in May. Like Barcelona, this mission is part of the national smart city strategy. Minister of Internal Affairs, Kajsa Ollongren will host the delegation. Are you looking for opportunities and would you like to join? Check this message and register before the 8th of April.

In the first week of April City-zen Days Amsterdam takes place: the event about CO2 reduction in the Amsterdam Metropolitan Area. Over the past five years, 25 partners have worked on 20 innovative projects in Amsterdam and in partner city Grenoble. Participants at the City-zen Days Amsterdam are presented with a range of topics, ranging from smart grid solutions (charging points with which electric vehicles contribute to 'load balancing' of the network) and district heating (such as using the IJ for residential cooling) to innovative renovations (preserving and making Airey homes from the 60s 21st century proof). Will you be there?

In April and May, we will organize new Demo days! Do you have any questions in the meantime? Drop a line below!