Recap of the event ‘Data dilemma’s #2 Sensing the city’ 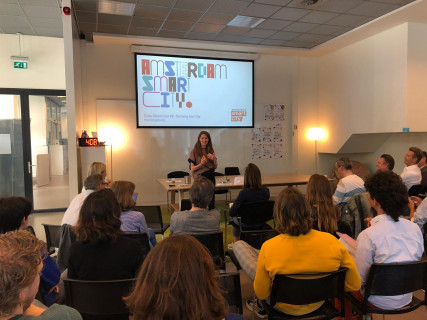 On the 6th of June, some people of the Amsterdam Smart City community came together in Datalab to discuss dilemma’s around sensing the city. What are issues around this theme? Who should do this? How can we involve citizens? What are the learnings up until now?

Leonie van den Beuken opens the afternoon and states that we should not only keep talking and keep figuring and losing time. Because time is what we don’t have. If you're aiming for a better world, you have to act now. ‘So today’, she says, ‘we have people who are acting upon our dilemma’s. And if we are truly able and willing to learn from each other, we can accelerate.’

Judith Veenkamp – Waag
Judith from Waag kicks off by telling about the Smart Citizens Lab. A research lab with a leading role for citizens and aims to facilitate them in measuring their own living environment, so called ‘public research’. Within the Smart Citizens Lab Waag developed a framework for citizen sensing: how to enable citizens in doing their own measurements. Not only are they in charge of sensing strategy for the sensors that will be deployed in the city, the data collected will also be analysed and interpreted together with citizens. Collecting the data together with citizens and other stakeholders, like municipalities, helps to create a shared reality.

For their project Hollandse Luchten, an air quality sensor was developed in their lab. The basic version measures Particular Matter (PM), temperature, humidity and air pressure. The extended version also measures NO2 and O3. They will deploy 200 sensors in 3 pilot communities; IJmond region, Zaanstad en Buiksloterham. The sensor is a modular system and citizens assemble the sensor themselves. The aim goes beyond just measuring, it is to have societal impact by increasing awareness. It is not an alternative for professional measurements but they can enrich the official air quality measurements and empower citizens.

A nice example of how tech can help build a sustainable city. Technology as a mean. Not just talking about it but also making and experimenting.

Ron also takes us through the process of this project, in which the University of Utrecht is also participating, and shows what it went through before actually implementing. Different questions pop up from the audience. Some more practical; if it is only 1 point in time on every location, does it add value? There are already different measurement systems in place in Amsterdam: GGD , RIVM. What does this add?

Ron explains that it measures on street level, which is new. It will also measure more and it will contribute to create a global view. This also triggers more principled questions: if these are open data, how will it affect the housing market? Why does Google want to do this? Is this not a responsibility of the government? What aspects of political decision making were considered? What can and what will we do with the results?

Tom van Arman – CITIXL
Tom van Arman from CITIXL has an inspiring and triggering talk. Tom starts with warning us how data can affect us with some alerting examples. The large scale data collection in 1934 for the greater benefit of all but later misused by the Nazi regime. He also mentions the Chinese Social Credit Card Score; a system that is meant to rate each citizen’s trustworthiness. And last he shows us Quayside Toronto. A wonderful new future city, built by Google.

Will this really make our lives better or is it just for commercial benefits? How do we bridge the gap between policies and the public? How can we design tests with the public to create a shared reality and common understanding?

He ends with showing us his camera experiment of last year during WeMakeThe.City. The experiment featured a marked area telling you the area would recognize your face. All basis questions came up and this was a good discussion starter. This year CITIXL will start measuring all sorts of things on the Marineterrein; how many sunbathers, how many swimmers, a drowning alert, etc. Again a lot of ethical questions will be raised and dealt with. But if we can ‘t measure it, how can we improve it?

Roel van de Loo - SPPS
Roel has a lot of experience in measuring in the city, e.g. with eNoses in the Port of Amsterdam and starts with warning us that he will make us depressed: ‘Technology is not perfect and limited. Technology is still complicated for non-experts. Cheap sensors can be useful but they do not always tell the truth. They face difficulties for example with calibration and interferences. So be careful: it is not easy to measure. You have to know what a sensor does and what it does not.’

Roel shares some crucial lessons learned:
• Cooperation between governments, companies, foundations and citizens is essential but not easy.
• Make a detailed agreement. Once you share data between government and company, what is going to happen?
• Create a library and share learnings
Roel tells us there is a fundamental distrust of (government) calculations. Citizens only want to know what is wrong and they do not want to pay for it. Starting is easy but ending is hard.
------

Leonie asks: What would be ok for you to be measured? Also here different opinions. Collecting data is necessary to make informed decisions and to take emotions out of the discussion. But teach people on how to do that. These data can bring us a lot of positive uses. But how do we use it for good? It’s a fine line between surveillance and service.

Someone else states that data collection is enforced and it takes away freedom of autonomous decision making. Again enough data dilemma’s to discuss. In the audience, Paul Manwaring closes stating we are all part of the city – we have to explore data opportunities, while respecting each other’s rights and be transparent, we’ve got to try!