Self-driving buses on the public road in Wageningen 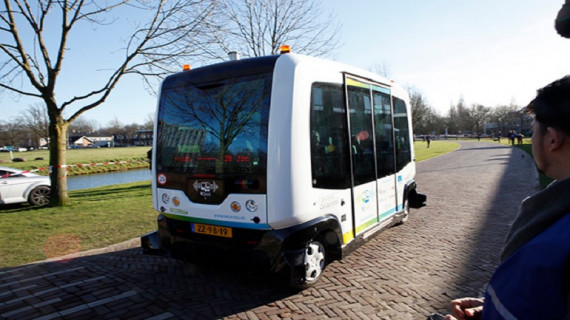 The first self-driving buses are launched in Wageningen (Netherlands). The buses don’t have a wheel anymore and don’t have to drive in special lanes. If you want to order a ride on the WEpod you should organize this through an app. In Rotterdam and London there are also self-driving buses but those buses run on special single trajectory lanes. The WEpods in Wageningen drive on the public road with a maximum speed of 25 kilometers per hour. The US also has self-driving buses but none of the buses removed the wheel completely. The fully automatic controlling system of the WEpod relies on technology: GPS, 360° cameras, laser and radar. All the movements of the vehicle will be controlled. From June 2016 onwards two WEpods will drive on a set path. The buses has six places. A ride needs to be arranged through the corresponding app. The pilot project is the result of an intensive collaboration between companies, the government and knowledge institutions. Later on the WEpod will be introduced in other parts of the Netherlands.