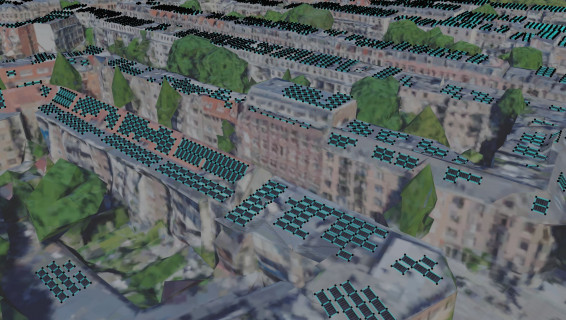 To illustrate, the City wants to eliminate the use of natural gas by 2040, phase out fossil fuels by 2050, and have 80% of the electricity that households use to be generated by solar and wind energy in 2030. Regarding the latter, Amsterdam aims to install a total solar energy capacity of 550 megawatts (MW) by 2030. Taking into account modern solar panels of 330 watt-peak, this adds up to 1.67 million solar panels.

With these ambitions set, what is the 'true' implementation potential for solar panels in Amsterdam – in terms of space on the city's rooftops? Which neighborhoods, streets, or even houses have the highest yield? And how can this be calculated best? The PV Advent Calendar project, led by AMS institute and TU Delft, investigates the city's solar panel implementation potential.

True solar panel implementation potential up to 6.5x bigger
A tool – also referred to as the “multi-layer framework” – developed for the PV Calendar project measures the optimal allocation of solar panels for each roof section.

The tool calculates that a total of 3.250.000 solar panels can be installed on Amsterdam rooftops. That means in Amsterdam there’s room to potentially install 6.5 times as many photovoltaic (PV) systems than the 500,000 currently installed on the city’s roofs.

What would this look like in the city? To give you an impression, with the true potential of 3,25 million solar panels installed this comes down to approximately 6.5 solar panels per residential address (taking into account 527755 addresses in total). The tool calculates that 1/4 Amsterdam’s electricity consumption could be solar based... Click on the link to read the full article >>

Misschien gebruik maken van de Zonatlas? Maybe you can use the data and functionality of Zonatlas? https://www.zonatlas.nl/start/over-ons/