Tech for Society – can an app save the world? 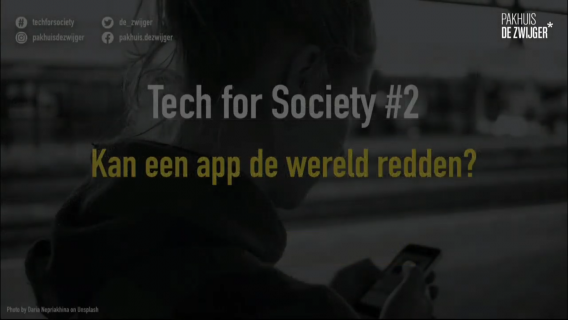 Last Friday, the second edition of the Tech for Society series was launched in Pakhuis de Zwijger: the livestream series about the role of technology in a society that is under pressure of the corona crisis . With this time a special focus on the contact-tracing apps. What do you think: can an app save the world?

Last Friday, the second edition of the Tech for Society series was launched in Pakhuis de Zwijger: the livestream series about the role of technology in a society that is under pressure of the corona crisis. With this time a special focus on the contact-tracing apps. What do you think: can an app save the world?

Why is tracking, contact-research, of an infectious person so important in times of corona? Mariska Petrignani, infection control doctor at GGD (public health service), explains: “GGD’s most important work at the moment is finding out who’s been in contact with an infected person to prevent rapid spreading of the infection. We do this by relying on the memory of the infected person. But there are always contacts you can’t recall or don’t know by name, for instance people you saw in the supermarket or public transport. But the question we have to ask is: to what extent are these people at risk for exposure and on what level do they contribute to the transmission of the disease?" There’s a lot of scientific discussion surrounding this topic.

According to Mariska, GPS-tracking, which can be recorded via an app, can help but doesn’t cover all relevant information. Is there a wall between you and the person you are in contact with? That is the type of information you need to know as well.

Michiel Heidenrijk, director of the Amsterdam Health & Technology Institute, adds to the discussion: “Can an app save the world? There is not one silver bullet, you need a combination of different therapies/solutions. Technology and data can offer parts of the solution.”. Mariska adds: “A common problem is that people can’t recall exactly where they have been. Technology can help. There are many ways to support this and it doesn’t have to be a contact-tracking app. For instance you can use your phone as a digital agenda to log your movements. We should think about other smart, digital solutions.”. Michiel: “We should embrace technology, use data, but it should be used in a sufficient and reliable way.”.

Hannes Grassegger, tech-journalist based in Zurich, sketches the European perspective. After a two week testing period of a contact-tracing app in Zurich, the app will be launched mid-June in Swiss. It’s completely voluntary, but hosted by the federal government, which is highly trusted by the public.

But isn’t it time for a broader European strategy? Hannes explains that coming week E-health will publish guidelines for the European common strategy for contact-tracing apps, to align the European members. E-health does not see the app itself as a major tool to bring back the freedom of movement between the member states, but they try to develop a framework to avoid the app becoming an obstacle to reintegrating the freedom of movement within Europe. Hannes: “If we have different states within Europe using different apps, there is need to have a set of common ground rules.”.

Lotje Siffels, philosopher in technology, conducts research on the influence of big-tech companies in the healthcare sector. She wants to stipulate two important discussion points: i) Technology is often seen as THE solution to the whole problem, while the problem is a lot more complex. It almost seems like the exit strategy is entirely depending on the use of contract-tracing apps. While this is certainly not the case; ii) Privacy is broadly mentioned within the discussion, but there are so much more social values that have to be discussed as well. Think about autonomy or democratic values. As an example Lotje mentions the ‘zwaai-app’: “If you meet someone or accidentally bump into someone, you wave with your phone and the data of the other person is saved. This helps you log your movements while being conscious of the data that is stored. You give a level of autonomy back to the people, because they are the ones consciously keeping track of their own encounters.” Active participation can also be part of the solution.

Lotte Houwing, policy advisor at Bits of Freedom, is the last speaker of the evening and raises questions surrounding the necessity of such an app. Do we actually want this app? What exactly is the problem we need solved? What are the advantages and disadvantages? What is the impact on our society? She adds that these questions need to be answered first before we can assess if an app is indeed the right tool to implement.

The discussion of this evening is exactly the discussion that needs to take place. Amsterdam Smart City beliefs in technology as a means, never as a goal. Before thinking about contact-tracking apps, the right questions need to be raised and answered. Amsterdam Smart City always puts public value first: innovating together and openly, using each other’s expertise, with the resident at the centre.

Do you want to watch the full episode? You can watch it here (in Dutch): <https://dezwijger.nl/programma/kan-een-app-de-wereld-redden>