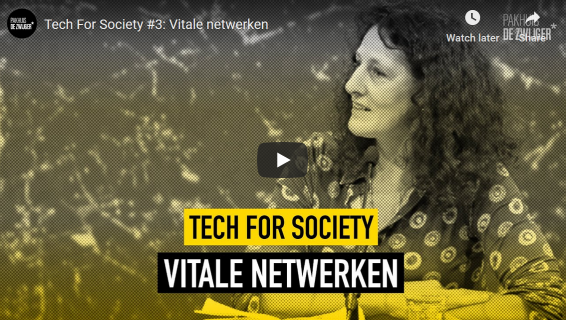 Last Friday, the third edition of the Tech for Society series was launched in Pakhuis de Zwijger: the livestream series about the role of technology in a society that is under pressure of the corona crisis. In this edition the panel discussed about various aspects in vital networks in our society. Because one thing the corona crisis made clear, we are depending on a lot of networks: electricity, heating, internet. And what happens if they disappear or break down?

Martijntje Smits, technology philosopher kicks off the livecast by explaining how there are a lot of vital networks in our society. We are not even aware of the amount. People only realize this when they disappear. In history we set up our own networks, such as heating our houses or growing our own food. However, humanity decided to outsource these systems and make a big system. At the end of the 19th century we decided to give governments control over these systems, so that they would be accessible for everybody.

Pallas Agterberg, strategy manager of grid operator Alliander and part of the steering committee of Amsterdam Smart City: ‘This decision is still visible in our energy grid. The electricity grid is owned by public organizations, provinces. However, data networks have private owners. For smart metering an exception was made, and there are more exceptions, for example the police and defence have their own non-public networks. However, to set up a separate organization for every vital connection is way too expensive.’

But the fact remains that we are fully dependent on the private sector when it comes to the digital infrastructure. For example, there are no optical fiber connections in Amsterdam because this is commercially not interesting. Why wouldn’t we make the government owner of the hardware and cables in the ground? Then we have democratic check. All the data traffic can be done by private companies, just like the energy networks. Alliander, a utility company, controls the grid and other companies such as energy suppliers, can arrange data services. This way the stability of the grid is guaranteed and people can choose the suppliers they want.

Limitations to the network

Very often, we didn’t know we needed an innovation until it was developed. We didn’t know we needed cars and now we can’t imagine the world without a car industry and traffic jams. There are limitations to the infrastructure. Physically that is very clear, with the traffic jams and the impossibility of cutting more trees to build roads. Pallas: ‘In the energy grid, the same developments are going on. The grid was designed in 1870. If we install too many solar panels, the system will be stuck. Expanding the grid is possible, but not unlimited. Therefore it is more wise to install solar panels on your roof instead of making big solar fields. Then the grid doesn’t have to expand to these fields (which costs a lot of time and money).’ In technology however, the situation is different. It seems as if digital networks don’t have any boundaries. Martijntje: ‘There is this utopia of setting up a digital world, a belief in arranging everything digitally. But we pay a price for this, we need an enormous amount of energy and natural resources. Networks cannot grow uncontrolled, even though they seem to.’

Joshua Serrao, of the taskforce Digital Safety of the City of Amsterdam, explains how the city is preparing for the limitations of the digital network: ‘We think about the limitations and vulnerabilities of the networks and anticipate on the risks. We even developed a simulation game, in case our systems get hacked. We have to take into account the possibility of not being able to use electricity for a while, data from citizens can get stolen or communications layers will be switched off.’ We are often not aware of the vulnerabilities because we cannot see the crucial infrastructures. Joshua: ‘It is really important for Amsterdam to collaborate more with the private sector and set up a basic level of security, maybe set up security by design in all kinds of processes.’ Martijntje: ‘To have a robust infrastructure, means we also need alternatives. We cannot control everything and manage all risks. So to protect vital networks, we basically need two things: 1. prevention, set up independent networks and 2. Risk management. Set up back-ups or think of (analogue) alternatives. And a robust systems needs a vision on democracy. Big, efficient systems are vulnerable, what does society need from these systems?’

Marietje Schaake, president of the The Cyberpeace Institute and former member of the European Parliament has this vision. According to her, digitalization and privatization led to new vulnerabilities. A lot of organizations in the public sector, for example hospitals, use old versions of commercial software. They don’t update these because that is not their priority. And it usually costs a lot of money. But this makes our public sector defenceless and weak. And certainly in these times, they are extremely important. We have to strengthen them. Marietje: ‘We discussed this often in the European Parliament, but member states usually don’t want to share these responsibilities. They want a digital market with good connections, but take decisions on risks and safety on a local level, because this is their national security. We need more collaboration on cybersecurity. But this will take a long time, if capital cities don’t want it, the EU can’t do anything.’

‘In the European Union we are looking for laws and regulations to protect the states in the digital domain. We need a vision on the collective interest, on digitalization and AI. And hopefully we will see this in the policy as well. Today it is not clear how to apply existing laws and regulations on digitalization and what new laws should do. How to control AI? Who is in the end responsible for developments in the digital domain? And which vital networks should be into the hands of the public sector? This should be more clear. Start with transparency’, she concludes.

According to Amsterdam Smart City, the discussion of this evening is exactly the discussion that needs to take place. We are all so dependent on vital networks, the owners of these networks should be transparent about them. This asks for a collaboration between the public and private sector, something we work on every day. Amsterdam Smart City always puts public value first: innovating together and transparent, using each other’s expertise, with the resident at the centre.