Technical University of Eindhoven Experiences Amsterdam as a Smart City 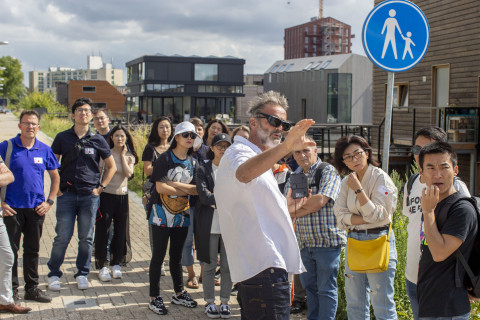 On August 29, Amsterdam Smart City hosted a large delegation from the Technical University of Eindhoven (TUe). A group of more than fifty professors, researchers and PhD students from the Urban Systems & Real Estate unit and Construction Management & Engineering group travelled to Amsterdam to learn about and experience innovations related to digitalization of the built environment.

The afternoon was co-hosted together with Amsterdam Metropolitan Solutions Institute (AMS) and the City of Amsterdam Chief Technology Office (CTO). Tom Kuipers (Program Developer Smart Urban Mobility, AMS) welcomed the group and introduced the AMS approach to developing metropolitan solutions to solve urban challenges for the city of Amsterdam as well as cities worldwide. The main case study presented was Roboat – a fleet of autonomous boats developed in collaboration with Massachusetts Institute of Technology (MIT) in Boston. The latest use-case proposed is that of a “dynamic bridge” created by autonomous roboats. This could be particularly helpful on the Marineterrein where a bridge is missing between the NEMO Science Center and the recently opened NEMO Studio. Kuipers briefly introduced the collaboration between AMS Institute, NEMO, Amsterdam Smart City, Amsterdam Economic Board and the Bureau Marineterrein which has the goal of transforming the Marineterrein into a living lab for innovation, experimentation and learning. While developments are in early stages, anyone can submit an idea for a pilot or test on the Marineterrein.

Leonie van den Beuken (Program Director, Amsterdam Smart City) emphasized the importance of working together to make and keep our cities liveable: “We are facing wicked problems. Solutions to these wicked problems can only be achieved by working together with different kinds of partners.” That’s why Amsterdam Smart City facilitates co-creation and innovation through a public-private partnership and a community platform that brings together proactive citizens, innovative companies, knowledge institutions and public authorities. Nevertheless, van den Beuken explained it remains a challenge for (governmental) organizations to share data, information and knowledge with each other.

Aik van Eemeren (Innovation Manager) and Daan Groenink (Innovation Officer) introduced the work of the City of Amsterdam Chief Technology Office. In March of 2019, the City launched its first Digital City Agenda laying out a vision for a free, inclusive and creative digital city. With this document the City of Amsterdam acknowledges that technology is never neutral and aims to ensure that everyone will benefit from digitisation and new technologies. Van Eemeren explained that a big challenge for the municipality is to keep an overview of the technology embedded in the different products and services the city procures. “We have to be able to ask the right questions to prevent us from procuring black-box technologies which are biased or can be hacked.” Van Eemeren also invited the delegates to share innovative solutions and technologies with the City of Amsterdam: “We are always looking for innovative solutions and technologies so please get in touch with us to share ideas and solutions of which we might not already be aware.” 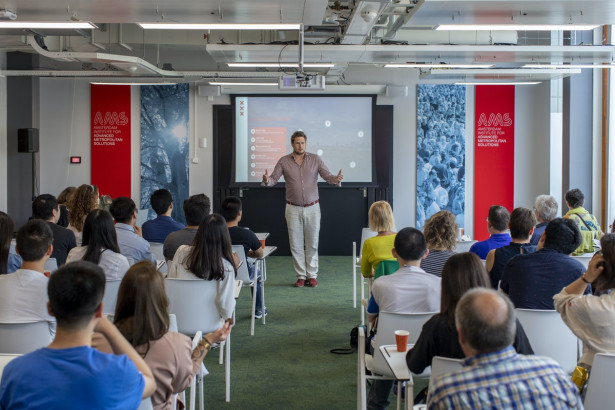 Daan Groenink introduced the Digital Perimeter project at the Johan Cruijff Arena, which is being developed in collaboration with the City of Amsterdam, the National Office and TNO in the lead up to UF2020. The project team is collaborating to develop and implement a number of solutions including facial recognition, bodycams (5G), blue-force tracking & smart sensors to detect weapons/fireworks. Gronink explained a big challenge for the team is to ensure that these solutions are ethically responsible and adhere with the TaDa principles adopted by the City of Amsterdam.

For the second part of the program, the group visited projects in Amsterdam North and at Zuidas.

In Amsterdam North, the group visited Buiksloterham, Amsterdam’s a living lab for circular and smart area development. Frank Alsema (Urban Labs) and Philip Gladek (Spectral Energy) led the group around the district starting with visits at the Ceuvel. This former shipyard has been converted into a circular community of entrepreneurs and creatives, implementing low-cost, decentralized and DIY (do-it-yourself) clean technologies. The land which is heavily polluted is being cleaned using plants through phytoremediation and grey water is being cleaned using low-cost bio-filters. 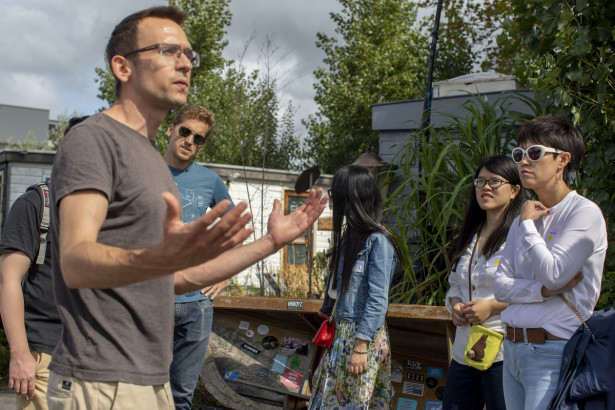 The next project visited was Schoonschip consisting of 40 floating plots for 46 households. The project aims to be the most sustainable floating neighbourhood in Europe. The houseboats are not connected to natural gas; instead they use heat pumps, solar panels and home batteries connected in a microgrid. Another unique feature of the neighbourhood is that is uses vacuum toilets, similar to toilets found on airplanes. In the near future, the sewage from Schoonschip will be processed into biogas and nutrients at a nearby neighbourhood bio-refinery. 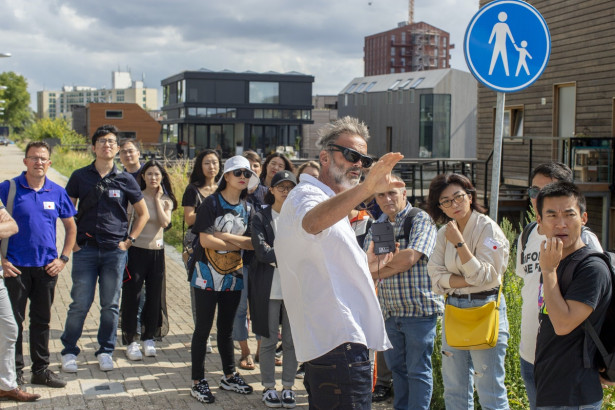 Frank Alsema, one of the pioneers in the area concluded his tour by reflecting that “a balance between top-down and bottom-up initiatives is needed to transition to a clean energy, circular city. Entrepreneurs and innovative people are needed to pioneer and come up with crazy solutions. Schoonschip and De Ceuvel are examples of the kind of bottom-up initiatives that are needed.”

Philip wrapped up his tour by telling about “ATELIER”, an exciting new project financed by an European Horizon 2020 grant and developed in collaboration with the Amsterdam University of Applied Sciences (HvA). ATELIER will connect Schoonschip and a number of other buildings in Buiksloterham into an energy-positive neighbourhood using flexibility, network balancing and peer-to-peer energy trading.

From the bottom-up and creative living lab of Buiksloterham, the group travelled to Amsterdam’s financial district at Zuidas, or South Axis. In the middle of the district, the group visited ABN AMRO’s Circl pavilion -- a building constructed on circular principles.

One of the most important features of Circl is that is has a material passport which documents all the materials used in the building. Pablo van den Bosch of Madaster, the foundation implementing Circl’s material passports explained: “Waste is material without an identity. My identity is my passport. Why don’t we take this concept and use if for the most precious thing that the earth generates – our resources.”

The group wrapped up the program on the rooftop of Circl with great views of the Zuidas district and a discussion of key developments in the area. One of the most important features is the transformation of the district was the transition from being mono-functional to a multifunctional district through the construction of residential and commercial functions. The group could also observe the construction now underway on the Zuidasdok, which will place a portion of the A10 ringroad underground, making room for the Zuid Train Station to grow. The Zuidasdok is one of the largest infrastructure projects in the country and its implementation over the next decade is expected to worsen congestion in an already congested district. This is the driver behind several smart mobility experiments at Zuidas, including bike and car-share initiatives and Amsterdam’s first pilots with Mobility as a Service (MaaS). 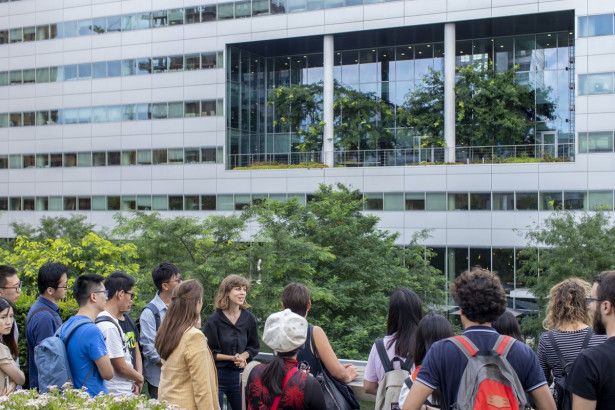 **The program concluded on the rooftop of Circl with a discussion about key developments at Zuidas. Photos by Thomas Schlijper.

We hope the various presentations and study visits will enrich the group’s research and studies! Are you a professor, researcher or students who participated in the program? Share your feedback and reflections from the expedition below!