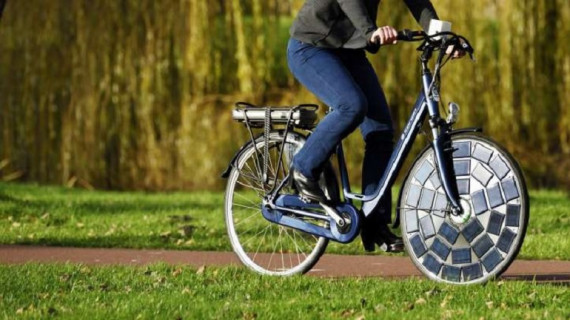 The Solar Bike has 60 compact solar panels in the front wheel, connected in a micro-cluster. The panels each supply a maximum of 0,6 watt electricity. The power flows to the battery in the bicycle that drives the electric motor.

On average the panels ensure double the reach of an electric bike, according to Marc Peters, founder of Solar Application Lab. The battery will also endure longer on average.

Peters will showed the first design of the Solar Bike last week to the press. Now a test phase will begin. Several participants will test ten e-bikes, this test will run until the end of July.

Eventually Peter wants to launch the sun bicycle next year. But he also wants to do more research to further product improvements, like making the bicycle lighter by placing a smaller battery or by using solar film of the firm Orange Solar. He also does research on how to protect the bike better against stealing or vandalism.

Solar Application Lab works on the development of the sun bike together with TU Eindhoven, high-tech-service Segula and Ebike Nederland. Peters says that he also got in touch with bicycle manufacturers. If the bicycle is a success he wants to produce them on a larger scale in China. Next to Europe he also sees a demand in Asia for green bikes, for example a bike sharing system. The price of the bicycle will be about 2300 or 2400 euros.