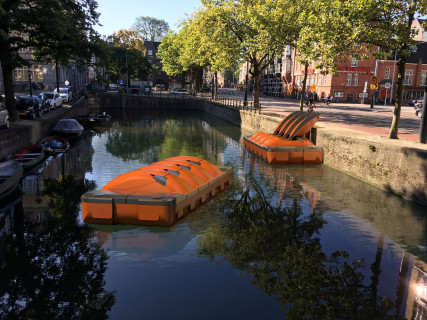 For more information and the latetest news on Roboat click here.

As 25% of the city of Amsterdam consists of water surface, Amsterdam offers the ideal environment to expand its current infrastructure with the deployment of autonomous vessels, alleviating pressure from the relatively small but busy city center. For example, by using Roboat to collect waste from Amsterdam’s city center, the number of traffic movements within the city center can be reduced. For the scenic views on the Amsterdam canals Roboat offers a more attractive way of collecting household waste, which is currently still being placed at the curbs of the canals, distorting the view on the canals, taking up a lot of space and attracting rodents.

Depending on the assignment Roboat is given, the boat is able to determine the optimal route from A to B in the Amsterdam canals. Roboat does not only consider how busy it is on the water, and incorporates the characteristics of the canals and bridges such as width and height, it also takes into account possible obstacles that it might encounter on the canals. In order to accelerate the tests and development of the technology behind the autonomous navigation, current prototypes are developed on a 1:4 scale model.

As the vessels can be latched to each other, temporary infrastructures can be set up to create bridges or platforms, or for example, Roboat units can function as push and tug boats. In the second year of research, the mechanism for latching or docking vessels to the quay was further developed.

As part of the Roboat project a new type of sensors is being developed and tested. These sensors continuously measure the water quality while the autonomous vessels move throughout the city. Based on the data they gather, a better insight is gained into the quality of surface water and water flows, which contributes to urban water management.

Roboat is a research program by AMS Institute. Working on the project is a consortium of researchers from Massachusetts Institute of Technology, Delft University of Technology and Wageningen University and Research. Waternet, City of Amsterdam and City of Boston are supportive of the program.

In the third research year activities will focus, among others, on:

The research is set in Amsterdam, yet aims to become a reference study for many urban areas around the globe. “It is a fantastic opportunity for Amsterdam,” said the city’s former alderman and vice mayor Kajsa Ollongren. “To have the world’s most prominent scientists work on solutions with autonomous boats in this way is unprecedented, and most fitting for a city where water and technology have been linked for ages.”