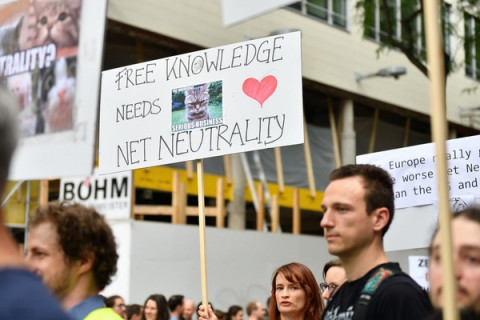 While China is digitally monitoring its citizens and the US saw the abolition of the net neutrality law, it’s time to think about how to bring the tech back to the people. The world-wide Tech for Good movement focuses on just that: the potential of good technology to support citizens and solve social problems. In this edition of New Democracy we explore the democratic use of the internet and its many possibilities, from bottom-up and DIY initiatives to European policy. Together with four women who work at the forefront of digital innovation, Marietje Schaake, Melanie Rieback, Giulietta Marani and Marleen Stikker, we discuss our agency in the struggle for a free internet.

Marietje Schaake is a great defender of digital rights and has been serving as Member of European Parliament for D66/ALDE since 2009. She is coordinator on the International Trade committee and spokesperson on transatlantic trade and digital trade. In addition, Schaake is a member of the European Council on Foreign Relations and an advisor to the Center for Human Technology. She is also founder of the European Parliament Intergroup on the Digital Agenda for Europe. Schaake was featured by Politico as one of the 28 most influential Europeans in the ‘class of 2017’.

Melanie Rieback is CEO and co-founder of Radically Open Security, the world’s first non-profit computer security consultancy company. Unlike other cybersecurity companies, Radically Open Security operates on the basis of transparency and open source. With this approach Radically Open Security was named the 50th Most Innovative SME by the Dutch Chamber of Commerce. Rieback also won the TIM Award in 2017 for the most innovative IT leader in the Netherlands and was named one of the fifty most inspiring women in tech. Rieback is a former Assistant Professor of Computer Science at VU University Amsterdam and performed RFID security research that attracted worldwide press coverage and won several awards. Rieback also co-founded the Dutch Girl Geek Dinner.

Giulietta Marani is senior-adviser at ICTU. At ICTU she is currently works on an open source innovation ecosystem to help governments share innovations and innovate as one government. The aim is a platform that assumes cooperation, sharing and re-use of information. Marani also contributed to the book ‘The Legal Aspects of Blockchain‘ about the implications of blockchain on human rights, the UN system, smart contracts, identity, data management, land administration and cryptocurrencies.

Marleen Stikker is founder of Waag. She also founded De Digitale Stad (The Digital City) in 1993, the first virtual community introducing free public access to the internet. Stikker leads Waag, a social enterprise that consists of a research institute for creative technologies and social innovation and Waag Products, that launched companies like Fairphone, the first fair smartphone in the world. Stikker is actively involved in the Open Design and Creative Commons movement and believes that society needs open technologies that meet societal challenges.

This event will be held in English