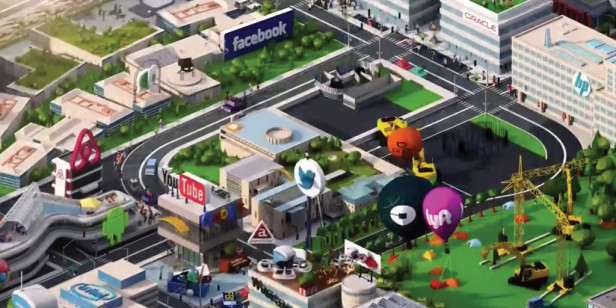 Ten years ago, during the “Great Recession” cash strapped cities began to outsource complex municipal projects to big-tech companies like IBM, Cisco, Oracle & Google. For these companies, city making became a new marketplace to test new products and services. What is the future of urban planning in our hyper-digital era and big-tech partnerships?

The ubiquity of smart phones and the internet of everything (ioT) is producing colossal amounts of data that becomes a blueprint of how to build sustainable and inclusive cities. Data has not only entered our homes and businesses, it’s becoming the core component to our smart cities. All of this data is giving software companies more power than ever, or, as Google’s sister company Side Walk Labs describes, it allows us to reimagine cities from the internet up leaving many architects and urban planners out of touch with the growing divide between the physical and digital domains.

Urban design, as we know it, is changing fast. Architects and planners are faced with the new reality that city officials require more innovative approaches to the challenges facing our urban environments. Master plans and zoning laws of the past are difficult to adhere to in a fast-paced era of autonomous vehicles, shared economies and climate change. With each new challenge, new partners are flooding the scene who can manage and make sense of this data but have little knowledge of urban planning.

Tech companies know more about our cities and citizens than our governments.
Between our purchase habits to point cloud scanning from self-driving vehicles, technologies make it possible for tech companies to gather huge amounts of data about us and how our cities operate. With this data “we have an opportunity to fundamentally redefine what urban life can actually be.” The lines between urban planning and business are becoming blurred. The challenge for architects and urban designers is to leverage the data to create sustainable environments for future generations, while the societal and environmental challenges of today can no longer be solved with same spatial design tools of yesterday.

When high-tech “experiments” don’t include the communities that occupy the cities, the consequences are predictable. For instance, one of the best examples today is Google’s Toronto Waterfront Development. This $1bn district will not only house Toronto’s growing tech industry, but also the new nerve center of Google Canada’s HQ. Google will be able to gather massive amounts of data. As Wired’s Susan Crawford writes: “Multitudes of sensors inside and outside buildings and on streets will be constantly on duty, monitoring and modulating. While the details of the arrangement aren’t public, the planning process is being paid for by Google, but that won’t continue unless government authorities reach an agreement that aligns with Google’s corporate interests.”

There are dozens of other examples like this. In each case, companies sell, manage and operate various municipal enterprise accounts that promise efficient, convenient, safer future cities. Some might not see this as a problem, but these smart cities are not built with commons in mind, but rather with an eye on corporate revenues and the intent to further refine product and service testing.

The most robust & resilient examples of smart cities are those that involve citizens throughout the process. Whether it’s Helsinki, London, Stockholm, Melbourne or New York, each of these smart cities share the vision to improve public services and quality of life through the use of disparate data that originates from various urban stakeholders.

Recently, the Royal Institute of British Architecture (RIBA) added “architecture for social purpose’ as the first topic of its latest core curriculum update. This topic encompasses the concept of understanding the social, economic and environmental benefits that architecture as a practice brings to both individuals and communities (https://architecture.com/knowledge-and-resources/knowledge-landing-page/what-is-architecture-for-social-purpose). Engineering firm Arup estimates that the global market for smart urban services will be $400 billion per year by 2020, but if these smart solutions are to work - a precondition should be to engage citizens and stakeholders as early as possible in the development.

One example of these new private / public engagements is Chicago, Illinois, USA. Chicago has harnessed data is through the Connect Chicago initiative with Cisco to enhance public safety and security despite limited budgets. Chicago’s open data portal has over 600 datasets that can be used in a number of different ways including: the development community to create local apps to improve traffic flow, businesses to develop and market services such as SweepAround.us (an app that alerts residents when street sweepers are in the area) and the City to monitor vehicles, residence smart phones, cameras and even gunshot detection.

Here in Amsterdam we are busy with innovation and new partnerships. Amsterdam boasts 20 IoT living labs, more than 250 smart city projects, more than 360 open and real time open datasets and 40,000 proactive city makers who actively collaborate in the numerous public-private partnerships. Amsterdam’s innovative ways and forward thinking has been recognized as The European Capital of Innovation Award in 2016. The city regards itself as an open platform for livability, innovation & digital social innovation. In 2017 it won the World Smart City Award for Circular Economy for its efforts to develop policy for urban-level circular economics in several areas, including: local production of sustainable and seasonal food, scores of sharing platforms, local production of electricity, reduction of fuel consumption and the improvement of waste recycling. Amsterdam is also known for IoT and bottom-up data initiatives like joint ownership and other innovative procurement processes making Amsterdam a truly inclusive city meeting the many needs of its citizens, government and business stakeholders.

Resistance to the changes that continue in city and urban planning is futile. Architects and urban designers need to embrace and even experiment with this new data and digital trends, but also get serious about a participatory process that involves private-public partnerships. We need to engage stakeholders in frank discussions about the shape of our future cities. Architects need to embrace innovation in order to remain relevant. They need to bridge the divide between cities in the classical sense that are no longer viable and engage with citizens and companies build viable cities of the future that engage citizens, utilize data and allow for flexible development.

In Amsterdam at the Innovation Exchange Lab we work directly with elected officials, citizens from and private partners to create rapid prototypes to create viable and resilient cities built by and for everyone.

Nice example in this regard maybe is the project Gebiedonline: https://amsterdamsmartcity.com/projects/gebiedonline-q401tgsl
It's not so much about urban planning, but it is about data by and for the commons. If you connect wishes about urban planning expressed there with, for example, Park om de Hoek you can definitely find some synergy!
https://amsterdamsmartcity.com/projects/park-om-de-hoek

Great article Tom,
I would love to meet up one day here in Amsterdam and discuss about digital innovation in ACE sector, plus opportunities for Smart Cities, and companies helping to design plus build them, to collaborate better in the future, with the help of digital tools and services.
Regards,
Sami Erpo - Pointscene