Amsterdam is already working on the traffic jams of the future 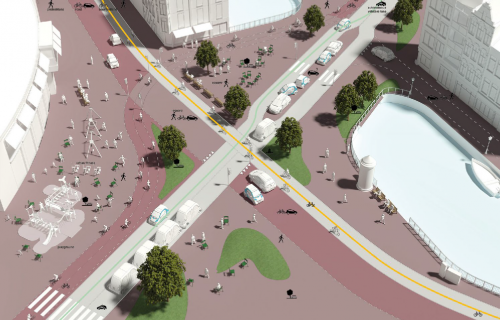 In two years, construction will start on the Zuidas, Amsterdam’s financial district. Amsterdam is turning the Zuidas into the biggest Smart Mobility Living Lab in the world. “The roads and cities are becoming more and more crowded, and at some point, it simply won’t fit anymore.”

In two years, construction will start on the Zuidas, Amsterdam’s financial district. Amsterdam is turning the Zuidas into the biggest Smart Mobility Living Lab in the world. “The roads and cities are becoming more and more crowded, and at some point, it simply won’t fit anymore.”

Imagine receiving a voucher worth 1.000 euros, to be spent on transportation within a month. You could rent a Tesla in the weekends, for instance. Or travel by train in business class. Or you could rent an e-bike and travel to work that way. And you get to keep all the money you haven’t spent at the end of that month.

The only thing you’d have to do to get it? Hand in your company car’s keys for a month.

This is an experiment the city of Amsterdam will carry out this October. Fifty people who work at the Zuidas – who normally commute by (company) car – will test the concept for a month. “Naturally, we’re hoping they realize they don’t necessarily need a company car; that there are other options available,” says Tijs Roelofs, Smart Mobility manager for the city of Amsterdam.

The experiment is a part of a much larger project the city is working on: Mobility as a Service, which, as the name implies, offers mobility and transportation as a service, whereas it’s generally seen as a possession. You own a car; you own an annual train card. But the city, in collaboration with employers at the Zuidas and beyond, wants to move towards a point where we start to see mobility as a service: you don’t own the product, but you use it – and then pass it on.

Thinking from a user’s point of view – someone who only has to pay for what he or she uses – fits in the rising concept of the sharing economy. Roelofs: “There’s a fundamental change in behavior taking place among people, through developments and new start-ups who focus on the sharing economy, or on unlimited subscriptions. This transition happened quietly with services such as Spotify or Netflix. You no longer wait to see what’s on TV or the radio; you ‘buy’ your own music. Whenever you like, whatever you like.” The city wants to implement the concept in transportation. What would happen if you could use every single stationary car and bike on one street? Would you still need as many as there are now?

The road to better transportation

A city that actively thinks from the user’s point of view requires a new way of thinking, Roelofs says. “It’s an important switch. For years, we’ve solved problems like traffic jams and transportation issues by offering more: if the roads were full, we’d build more roads. Or make them wider. Or build more train tracks.” But the roads are nearly up to full capacity, and matching supply and demand and spreading out through time and space is necessary. The National market and capacity analysis 2017 shows that the crowds in, and popularity of, the biggest cities are so great, that by 2040, the cities will be nearly impossible to get to. The Netherlands Bureau for Economic Policy Analysis predicts a rise of 23 to 50 per cent in individual mobility in the Netherlands until 2050. “The roads and cities are becoming more and more crowded, and it simply won’t fit anymore,” Roelofs says.

Add to that the upcoming large-scale construction work at the Zuidas. Alderman Pieter Litjens (Traffic, Transportation and Organization): “We’re investing a lot in Amsterdam’s accessibility. It’s definitely necessary, but it also causes inconveniences.” The A10-south road will be widened and a tunnel will be constructed underneath (Zuidasdok), and the train station South will be rebuilt and enlarged. The construction is expected to be done by 2028 – meaning nine years of continuous construction work on both roads and railways. Litjens: “Of course it’s important to minimize the disruptions asmuch as possible, but as a municipality, we want to take that next step at the same time: investing in solutions for tomorrow’s economy.”

Construction will start in 2019. “Most companies tend to want to hold back on measures until the very last moment,” Finn van Leeuwen says. “But if that’s when you start, you’re already too late. Companies are starting to feel this urgency; they need to stay accessible to employees and visitors.” Van Leeuwen is program manager Accessibility for the Zuidas. “I work with employers to find solutions to keep the accessibility at a certain level, and to ensure the Zuidas is a place where you’d like to live, work, and stay.” One specific short-term goal is to convince 1.500 people who travel to the Zuidas by car, not to do so during rush hour, but to start driving at different times. Not just during the planned construction work, but also afterwards. “This will only work if the alternative is truly better, faster, cheaper or healthier than driving. Theoretically, this is already the case for many alternatives, but it all needs to be simplified and more easily approachable. And we really need to listen to the users. It’ll only work when and if they’re satisfied.”

Van Leeuwen is mostly focusing on collaborations with employers. On September 15, the Zuidas companies’ CEOs will sign a declaration of intent to spend their mobility budget differently, purchasing mobility in a different way. That means no longer offering a company car in employees’ contracts, but for example offering young employees a transportation budget with a corresponding app, that allows them to choose their own methods of transportation. Van Leeuwen: “By having companies and government work together, we create both scale and 260 million euros a year will be the cost of traffic jams by 2040 if nothing changes market. This way, we can command innovation within the mobility industry, and really move forward in ways we can transport ourselves, both for work and in our private lives.”

To find the solutions, there are also cooperations with technology development companies. There’s an app from Finland, WHIM, with which Amsterdam will start a trial this October. The app advises the best or most efficient way to travel from point A to point B, using both public transportation and private transportation such as bike or rental car. It will show the user many different options for transportation. “Our app ensures you won’t have to pay for anything separately, as everything is taken care of in the app,” says Sampo Hietanen, the app’s creator.

“WHIM is an innovator, and the first to use a complete MaaS APP,” Van Leeuwen says. Roelofs adds: “It’s great to design these pilots with technologically innovative companies, because we as government can’t exactly build an app like that. That’s not where our strength lies.”

Freedom as a core value

One thing that will definitely remain the city’s responsibility, is making sure mobility will remain available to everyone. “This is one of the core values that we’ve stated as a city,” Roelofs says. “What kind of city do you want to be? What’s important? Amsterdam is a city of entrepreneurship, freedom, and inclusivity. We’d never tax bicycle use, for instance; that would clash with our core value of ‘freedom’.”

For the city, it’s a challenge to lead the path of technological innovations while adhering to this core value. Roelofs: “The only way people living in Amsterdam would ever consider no longer owning a car, or using it less frequently, is if they had a better and cheaper alternative, thereby experiencing ‘freedom of mobility’.

What is Amsterdam doing in terms of MaaS now?

1. The Zuidas Mobility Experience: not using your company car for a month. The Zuidas Mobility Experience wants to have fifty people who’ll give up their car for a month, and who will use a Zuidas pass worth 1.000 euros instead. The Zuidas pass will allow you to travel however you want, both for personal and business reasons: by train, subway, bus, e-bike, taxi or rental car. The Experience is a preview of the MaaS system, in which employees choose how to spend their mobility budget instead of being assigned a company car, fuel card and parking spot.

2. On September 15, the CEOs of the Zuidas companies will sign a declaration of intent to spend their mobility budget differently and to purchase mobility as a service. This is a lead up to December 15, when a cooperation agreement will be signed to ensure that MaaS will be launched at the Zuidas in the summer of 2018.

3. Amsterdam will start a contest at the end of 2017 to find the best MaaS solution for the city’s inhabitants, a solution that will ensure that as many people as possible will stop using their cards (and thereby making space for a more attractive public space).

This article was written by Charlotte van ‘t Wout.

Hello! Next week the Cenex-LCV and Cenex-CAM 2020 event will take place on 18th and 19th November. A yearly event organised by our partner Cenex in the UK. Normally, this is a physical event at the Millbrook proving ground just outside Milton Keynes receiving nearly 5000 visitors in 2019. Due to the Covid-19 situation, this event will now take place online.

It is a 2-day event, covering the newest developments in clean and smart mobility. You can browse through the full seminar program here: https://www.cenex-lcv.co.uk/seminars

If you see a session you would like to attend, register for free and mark the timeslot on your agenda. Visit the following link to reserve your virtual seat: https://register.cenexevents-2020.co.uk/cenex-lcv-cam

Besides the seminars, you can visit exhibitors virtually and start a chat if you wish. We as Cenex Nederland will also be present and host one of the technical talk seminar session. Stop by for a visit next week!

Hoping to see you there!