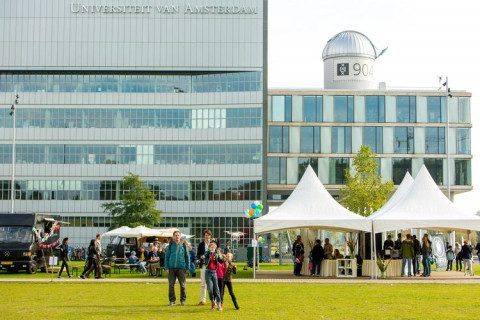 You could say that digital connectivity was born at Amsterdam Science Park – it was the location of the first transatlantic internet connection, after all. And with connectivity continuing to surge to ever greater heights, the park has no intention of resting on its laurels.

You could say that digital connectivity was born at Amsterdam Science Park – it was the location of the first transatlantic internet connection, after all. And with connectivity continuing to surge to ever greater heights, the park has no intention of resting on its laurels.

At SURFsara, the institute that acts as a bridge between research and advanced ICT, Maurice Bouwhuis sees a promising future for Amsterdam Science Park in generating the future interactions necessary to further tomorrow’s levels of digital connectivity. “The park combines excellent knowledge institutes with a large and expanding capacity in data centres,” he explains. “We will see more and more collaborations between these institutes and the digital companies that can benefit from their research. This is exactly what we need to keep the Amsterdam area competitive as we move towards a global knowledge economy.”

He notes that the park has the experience of bringing together businesses, knowledge institutes and policy makers in order to collaborate on new solutions – a vital combination as society becomes increasingly technological. “Digital developments are extremely far-reaching,” he says. “That means we have to work together: scientists with companies and policy makers.” The Mayor of Almere, Franc Weerwind, is one of the latter group, whose members are increasingly looking to Amsterdam Science Park to see what opportunities the future holds for the whole Amsterdam region.
Digital Connectivity event
Mayor Weerwind and other policymakers attended the Digital Connectivity event which SURFsara hosted on Novemer 2nd. This initiative demonstrated the sort of interaction Maurice Bouwhuis is talking about in action, and the discussions did not stop there. “We are talking about setting up an expert centre for responsible data, new ways for data centres to be more energy-efficient, and Amsterdam’s possible role in a neutral, independent public cloud,” says Bouwhuis. He points out that the EU has just allocated 2 billion euros in funds for the European Open Science Cloud Initiative, which indicates the scale of the opportunities for research. “Amsterdam Science Park should certainly be able to take advantage of this,” he says.
The Amsterdam Economic Board
The Amsterdam Economic Board shares the park’s vision, says Willem Koeman, Business Connector Digital Connectivity. He points out that the Board sees the Amsterdam area as consolidating its position as one of Europe’s top digital centres in the future – with the help of Amsterdam Science Park. “Amsterdam is one of the world’s biggest internet hubs, and that has grown from Amsterdam Science Park,” he says. “The park has great research institutes that can give the whole Amsterdam region a leading edge when it comes to the digital future. There are lots of opportunities here.”

The park has a particular strength in its five advanced data centres, he adds. “With data centres, it’s all about expanding capacity – as is happening here at Amsterdam Science Park with Equinix and Digital Realty,” he says. “We increasingly need more space to store and transport data. Meanwhile, we also need to make our data centres as green as possible. That means finding ways for them to become more energy efficient.” The new SURFsara data centre, for example, which has the power of 10,000 modern PCs, stores the enormous heat produced by its servers and uses it for heating and cooling – so greatly reducing its environmental impact. Meanwhile Green IT, with a presence at Amsterdam Science Park, is playing a leading role in showcasing new, energy-saving solutions in IT, in line with the City of Amsterdam’s aim to reduce its carbon emissions by 40% by 2025.

Also essential to maximize digital connectivity is another Amsterdam Science Park strength: data innovation. The park’s research institutes and data-driven start-ups are key in initiating potential new applications for the ever-expanding amount of available digital information, for example to support healthcare, sustainability and mobility. In the park’s new Startup Village, for example, Metrica Sports works on improving team performance through data and video analysis, while its neighbour Aiir Innovations uses artificial intelligence to create tailored solutions for a range of industrial and business problems – just two of Amsterdam Science Park’s blueprints for the digital future.