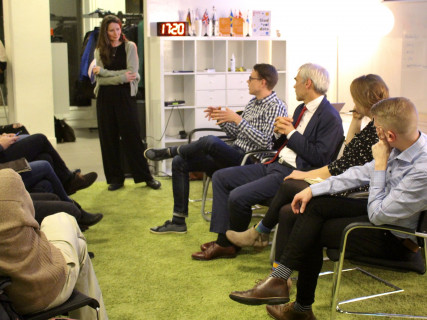 On Dec 2, Amsterdam Smart City and DataLab Amsterdam co-hosted the third “Data Dilemmas” event of the year — bringing together professionals to share experiences and dilemmas related to responsible use of data. Perspectives were featured from the cities of Hilversum, Boston, Amsterdam, and Reykjavik. A panel discussion followed which was moderated by Amsterdam Smart City’s program director, Leonie van den Beuken.

On Dec 2, Amsterdam Smart City and DataLab Amsterdam co-hosted the third “Data Dilemmas” event of the year — bringing together professionals to share experiences and dilemmas related to responsible use of data. Perspectives were featured from the cities of Hilversum, Boston, Amsterdam, and Reykjavik. A panel discussion followed which was moderated by Amsterdam Smart City’s program director, Leonie van den Beuken.

Herbert Steeman of Atos, the lead partner of a consortium which recently won a tender to develop a smart city data platform for the City of Hilversum, presented their vision for an open standard data platform. Working with Sustainder, Dynniq, Vodaphone-Ziggo and Esri, the platform will structure and combine data across various domains of the municipality. Herbert emphasized that the data platform does not in it of itself produce any results for the city; as such Atos will bring in a number of use cases already tested in other cities, for instance related to noise pollution and parking management.

Next, Jaclyn Youngblood, from the New Urban Mechanism department at the City of Boston, presented a number of data and civic innovation projects. Among them, “Where’s My Bus” is an open source application that makes it possible for parents to track their children’s school bus, helping reduce worry and frustration, especially during winter months when buses are more likely to be delayed. In a later phase of the project, children could tap-on and off the bus, automatically generating notification SMS’s for the parents. This led to ethical debates regarding tracking of buses vs children and how to do this in a safe and privacy-friendly way. Jaclyn reflected on the sensitivity of these discussions, especially given the history of surveillance technologies, which in Boston and other American cities have had a predominantly negative impact on communities of color. Jaclyn also presented “Beta Blocks,” a project that aims to engage people in a discussion about the deployment of technology in public realm through the use of a mobile exhibit.

Next-up Sander van der Waal from Waag presented their recent work on designing a framework for a Bicycle Data Commons, part of the European project Muvv. Together, Waag, the City of Amsterdam Chief Technology Office (CTO), and Vervoeregio (Transport Region Amsterdam) have the goal of designing a data commons where the community jointly sets the rules for access and use of data. Over a series of co-creation sessions, cycling and data experts worked to sketch a framework for a Bicycle Data Commons that aimed to secure data and privacy while making it possible to innovate by using data in new use cases. One of the key outcomes of the co-creation sessions was for stakeholders to articulate key values which would guide further developments, namely: 1. public interest 2. level playing field 3. transparency, 4. accessibility, and 5. sovereignty. The framework developed also aims to provide an alternative to the two dominant options when it comes to data collection: either you are being tracked or you can opt-out form the service. Waag advocates for a third option which gives citizens back control over what data they share.

The last presentation was by Óli Páll Geirsson, the City of Reykjavik’s Chief Data Officer (CDO). Óli’s task is to integrate various municipal data sets into a data-warehouse, as a way of supporting and improving the city’s capacity for evidence-driven decision making. A major barrier to achieve this data-driven organization is the archaic data architecture whereby data is locked up in silos. As the City of Reykjavik takes on this challenge, Óli and three of his colleagues visited Amsterdam to learn from Data Punt’s experience with similar developments.

During the panel discussion, several dilemmas were explored, for instance related to data minimization. In the time of “more” and “bigger” data, can governments train themselves to collect only the data that is necessary? The Cities of Amsterdam and Boston are working on this “data-minimization” concept.

Did you attend the Data Dilemmas event and do you have any additional thoughts or feedback from the discussion? Or do you have an example of a data dilemma which you would like to share with the community during a Data Dilemma event in 2020? Post your question or comment below or email <a>nancy@amsterdamsmartcity.com</a>.