Energy saving among Amsterdam citizens; students are up to the task! 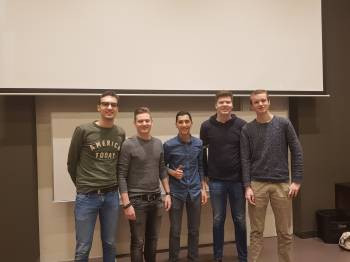 From cargo tram to retirement homes, this week we heard a lot of interesting ideas during student presentations at the HvA. 70 students studying Public Administration at the University of Applied Sciences (HvA) worked 14 weeks on Sustainability and Energy Transition. They wrote essays and worked in groups on creative ideas that should lead to less energy use and less waste by specific target groups.

Six student groups were selected to present their ideas in front of a jury with experts from the City of Amsterdam, Amsterdam Smart City and the HvA. They presented interesting plans to promote the use of biodegradable plastic in supermarkets and the infamous Amsterdam coffee shops, to increase waste separation by well targeted communication and more hygienic underground waste containers, and one group re-introduced an old idea of a cargo tram to distribute packages in town.

Winner of the pack was the group ‘Seniors on Energy’, with their plans to nudge those in retirement and care homes to use less energy by turning down the thermostat, putting on an extra sweater and promoting led lights. Luuk Zaal, Mohamed Belkasmi, Ruben Nap, Hidde Verhoeve and Lars van Oostenbrugge have already test-tried their idea by running a pilot in a care home in the North of Amsterdam with the Amsterdam funded Energy Coaches, and found the seniors to be very interested and willing to look at their energy use and potential savings. Sebastiaan Jacobs of the City of Amsterdam invited this group to work together to see how this can be put to practice.