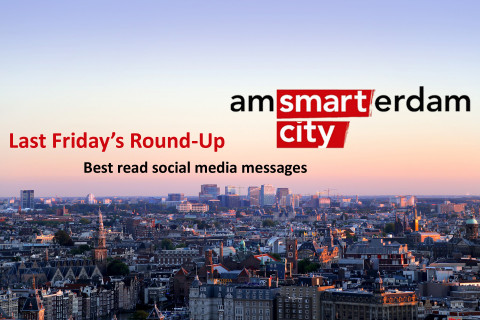 In April the Amsterdam Smart City community shared great news and projects again! And the rest of the world noticed this too! The following contributions stood out on our social media (Facebook, Twitter & LinkedIn. Check out the content that got the most likes and shares this month!

In April the Amsterdam Smart City community shared great news and projects again! And the rest of the world noticed this too! The following contributions stood out on our social media (Facebook, Twitter & LinkedIn). Check out the content that got the most likes and shares this month!

Each year, more than 250 million kilos of citrus are thrown away in the Netherlands. PeelPioneers, an organic refinery for citrus peels, has developed a process to convert the citrus peels into useable raw materials. The peels can be converted into for example fibres or aromatic compounds. By converting waste into valuable raw materials PeelPioneers contributes to the circular economy. The ultimate aim of this project is to become the world leader in peel processing industry. More information on the project here!

Many tourists visit Amsterdam each year. However the majority of those tourists visit the regular touristic hotspots which has an impact on the city’s infrastructure. Wyzer’s, a Startup in Residence graduate, mission is to playfully encourage people to follow their own routes. Leave the beaten tracks and discover Amsterdam’s hidden gems. By using an app as smart compass Wyzer would like to assist with the better disperse of visitors. At Kingsday Wyzer launched the first version of the app. What do you think of their solution? Download Wyzer and start sharing feedback with them!

Did you know a fully automated public transit system with self-driving vehicles is operational in the Netherlands since 1999? The ParkShuttle connects subaway station Kralings Zoom and business park Rivium in the City of Capelle aan den IJsel. Serving five intermediate stations over a length of 1.8 kilometres. The ParkShuttle system has proven to be a safe and reliable source of transportation. That is why the system will be enrolled on the public at the end of 2018. Take a peek at this innovative means of public transport!

One of today’s most urgent global problems is climate change. With the Dutch national elections behind and the ongoing formation negotiations. It is time to call on the government and political parties to take ambitious measurements to tackle climate change. That is why several Dutch NGO’s, businesses and political youth parties are united to organize the People’s Climate March Amsterdam the 29th of April. Join the march and call on The Hague to take ambitious climate legislation!