The City Innovation Exchange Lab (CITIXL) and the City of Taipei Department of IT win International Award for A.I. Camera test 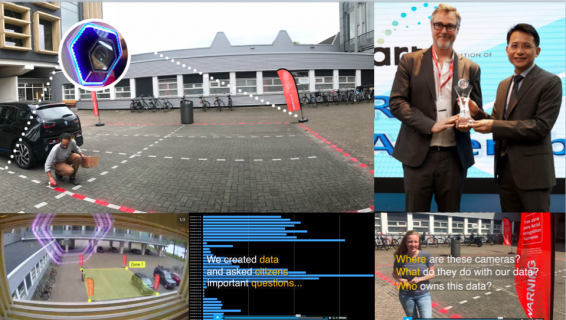 During the Smart City Summit and Expo Taipei this May, CITIXL won the inaugural Go Smart Awards for "excellence in intercity PoC collaborative projects among cites" for their test of A.I. Cameras during We Make the City festival 2018. To watch the video visit https://vimeo.com/320951765

The Parters in this project included CITIXL, Smart Taipei, the City of Taipei IT department, UMBO Camera, The City of Amsterdam CTO office, Makerversity, The Marineterrein Amsterdam and We Make the City.

This was a landmark, multi-stakeholder, international collaboration to test A.I. Camera (Camera Vision) use in public spaces with citizens in an interactive and inclusive experiment. The award and recognition further validates CITIXLs unique approach to generating data plus dialogue with experiments that raise public awareness, test smart city solutions and inform public policy.

During We Make the City festival 2018 the project partners installed an UMBO smart camera and created an experimental zone in front of building 27 on the Marineterrein to collect data about the amount of people entering the zone. At the same time, the zone was marked by warning signs to inform people about the experiment and CITIXL conducted interviews that informed a workshop on camera vision as service versus surveillance during the festival.

Since early 2018 CITXL has been working with the City of Amsterdam CTO office and various partner cities to gain insights on interactive smart city technologies that create social impact and cross the bridge between the city and citizen. Other experiments such as Smart Water Meters in De Cuevel in co-operation with the City of Daegu and Reclaiming Urban spaces with the City of Boston are gaining international recognition as practical and socially impactful projects that improve peoples lives.

For more information about CITXL, their organisation, partners, projects and how they create value and social impact with cities by experimentation as a service please visit www.citixl.com