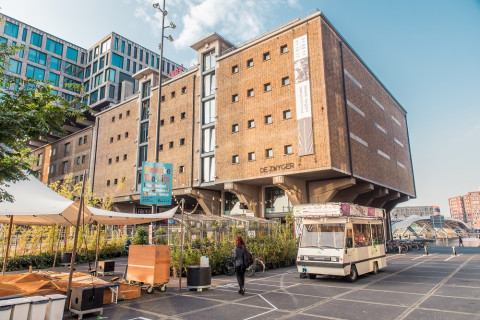 On the 21st of June we kicked off a new phase of Amsterdam Smart City. Amsterdam Smart City is an open collective of citizens, businesses, knowledge institutions and public authorities that are convinced that the changes necessary for the city and region, can only be achieved through collaboration.

More partners than ever are pooling their networks, knowledge and skills. Who are they? We will present some of them one by one. This time Pakhuis de Zwijger: ‘It is essential to make sure all Amsterdammers can decide about the future of their city.'

What is the main reason for you to join the open collective Amsterdam Smart City?

As Pakhuis de Zwijger we would like to facilitate and participate in an open dialogue on the transition of our city. We believe in the goals Amsterdam Smart City stated in the transition paths to a digital, circular and energy neutral city.

Amsterdam Smart City as a collective of cooperation is the perfect platform to achieve these goals.

What is your ambition for the city and the Amsterdam Metropolitan Area?

Pakhuis de Zwijger would always like to strengthen the dialogue between all Amsterdammers. We do this by organising events, dinners, festivals, conferences and screening films.

What do you think is the biggest challenge for the city and the region in the future?

With all the challenges of this time, like the energy transition, the unprecedented growth of the city, keeping the digital infrastructure open and accessible and the growing city moving, it is essential that we make sure that all Amsterdammers are able to participate in deciding the future of their city.

How do you see the role of the residents and citizens in your plans?

The Amsterdammers are central to achieving the goals of Amsterdam Smart City. That is why we are facilitating dialogues both in Pakhuis de Zwijger but also elsewhere in the city and through a festival like WeMakeThe.City.

What do you hope to work on in the upcoming years?

Last season we organised more than 600 events in Pakhuis de Zwijger and, together with our partners, we staged WeMakeThe.City. Next season we will certainly bring new events and a new edition of WeMakeThe.City. See our events in the calendar of Amsterdam Smart City or our website for more information.

Music Makes Change is intimate and open impact platform, that allows us to (re)connect, to feel the power of music, and to make lasting positive change in our communities, through civic engagement.

Artist / singer-songwriter Norman Vladimir believes that "one hour can change the world”. And that is why he, in partnership with Waag Futurelab, is excited to invite you to experience this special MMC edition, that combines live artists, awareness & action all in one event.

For this event, we are honoured to present singer-songwriter Luka (Lisa Lukaszczyk), who will both perform and be in conversation with us about topics like her music, her creative path, navigating the music industry, and taking control. Check her out on Spotify.

During Better Future Now Festival, Waag Futurelab and impact platform Music Makes Change are combining forces! A typical MMC edition consists of a talented musician/artist who is invited to perform an intimate set of music, followed by a conversation with the artist and a local volunteer organisation. This time we will discuss the concept of ‘hope’. How can we change the rules instead of fighting the system? Previous artist have been Marle Thomson, Kris Berry and Celine Cairo.
How can you attend? The event is free of charge, meaning we don’t ask for a financial payment. However, as always at MMC, the event will conclude with a mandatory sign-up by every attendee for ONE HOUR of volunteering with our featured local organisation, to make a powerful, local impact in our community and to round out the MMC experience. Just one hour of your time can already change the world!

About Luka
Born in Cape Town, raised and based in the Netherlands; singer-songwriter Lisa Lukaszczyk forms the creative foundation for her band Luka. Inspired by artists such as Feist, Sylvan Esso and Bon Iver, Luka exhibits a sound with touches of dreamy electro-pop, folk and soul. After having released 'Welcome, Generation Everything' in 2018, her debut album 'First Steps of Letting Go' (2020) is out now.​