What makes a city smart? Tech for Society recap 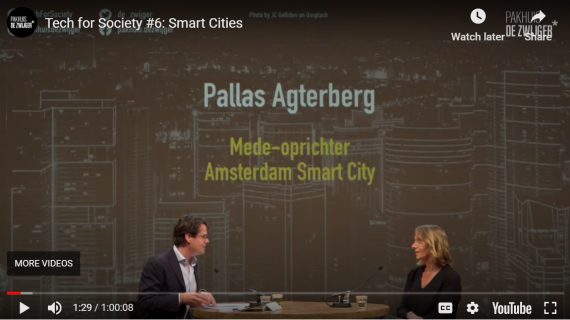 What makes a city smart? Last Monday, the 29th of June 2020, the sixth edition of the Tech for Society series was launched in Pakhuis de Zwijger: a livestream series about the role of technology in a society that is currently under pressure of the COVID-19 crisis. The central theme of this edition: “the search for the real smart city”.

First up in this edition is Pallas Agterberg, Director of Strategy at Alliander and co-founder of Amsterdam Smart City. Pallas started her search for the real smart city by working on the energy system of the future: “With renewables new kind of questions are raised like: where do we produce, where is it needed and who are the ones using it. We have to encounter more than just the energy domain: the build environment, mobility, industry, etc. In which digitalization plays a crucial and central role.”

What kind of Smart City do we want to build? Is it inclusive or exclusive? Is it open or closed? Pallas: “We can build an open city for everyone or we can build a closed city for the happy few. With closed meaning that you can only participate if you meet certain criteria, something you see more often in the Middle East. In Europe it’s self-evident that we want to build open and inclusive cities, but in many other parts of the world it is not yet so.”.

A Smart City is a collaborative one

10 years ago, Amsterdam Smart City started with the Climate Street. The Utrechtsestraat was transformed into a sustainable shopping street where innovative technologies were tested with the local entrepreneurs. Palllas: “Smart energy meters were tested together with the entrepreneurs and residents of the street. The smart meter gave insight in their energy usage and showed what interventions lowered their usage. But most importantly, the questions raised by the entrepreneurs and residents in the Utrechtsestraat were mostly focused on privacy issues like: can someone hack the data and see if and when I’m home?”. It’s not just an energy project anymore, digitalization and privacy played a key role in the success or failure of this project. Furthermore, the testing with and the active participation of the local entrepreneurs and residents revealed clearly the cross-over between the privacy and energy domain. So this legitimizes early involvement and co-creating between different actors at an early stage. These kind of collaborations were still quite rare and unique at that time.

The second speaker of the evening is Joost Beunderman (Director of Dark Matter laboratories). Joost agrees with Pallas: “Now it’s more important than ever for Europe to be aware of its unique position and view on the open and inclusive Smart City.” He is currently involved with the ‘Trees as Infrastructure’ project: an open source model to support municipalities in transitioning towards resilient urban forest management practices. Joost: ity governments cannot do this alone, it requires a new institutional infrastructure. With Trees as Infrastructure there are two main themes: the investment side and the cultural side:

But how can we ensure that these learnings can be scaled, shared and standardized?

Lessons learned by a technical philosopher for city officials

The last speaker of the livestream is Lotje Siffels (PhD candidate on technical philosophy). Her PhD is part of the ‘Digital Good’ project and investigates the googlization of health. Consumer tech companies are increasingly involved in the health domain. There is a trend of new kinds of collaborations between these companies and health researchers or physicians using big data to work towards more personalized and efficient health care. But this comes with a risk when thinking about our public values. What values do we want to incorporate? And how do we ensure that democratic participation remains feasible?

Lotje sums up her advice for city officials: “City governments must ensure knowledge development in the data sector within their office, should think about what values should be incorporated, what conditions & regulations are needed, have a plan in place to monitor this and make the process democratically.”

But how to keep our cities democratically governable? Pallas: “It shouldn’t be that complicated, but there are a number of steps to consider. In order to have an actual Smart City is to have an open and inclusive city. This means that we should be careful with data and the ownership of data, because this creates monopolies. If we don’t make the right agreements now, things can go wrong in the future.”

Do you want to watch the full episode? You can watch it here (in Dutch): <https://dezwijger.nl/programma/smart-cities-2>