Event report: Will the cities of the future be car-free? 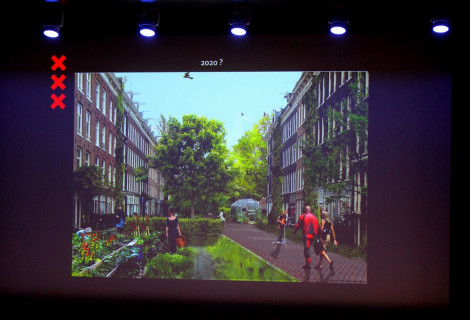 Climate change, air pollution and lack of space - issues to a lot of cities. Is the solution to become car-free? The third day of the urban festival WeMakeThe.City festival saw experts from industry, academia and government come together to discuss the future of urban mobility during the “Autoluwe Stad” conference. Read the report, written by Ellie Roy.

Rethinking the role of cars

Rogier Elshout, moderator of the conference, started by asking the audience: “What should the city of Amsterdam aim to achieve by 2040? Should the city become emission-free, completely car-free or should the government just leave things as they are?” The audience clearly favoured a city in which pollution was avoided and the role of cars reduced. Like many other cities worldwide, Amsterdam has already set a concrete goal for the future: by 2030 the city will be emission-free for all forms of transportation. In order to make this happen, sustainable alternatives to the car need to play a larger role. 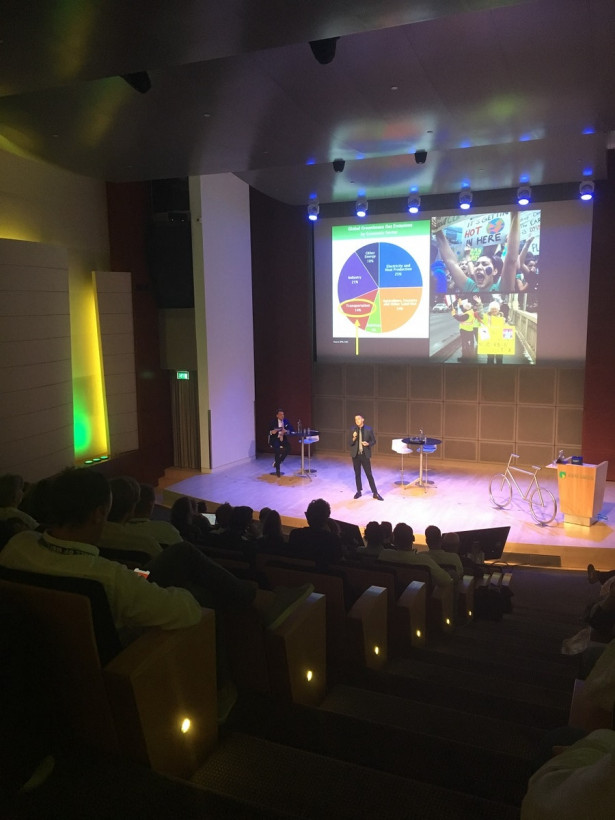 For the last decades cities, including Amsterdam, have focused on a car-centred design. Max Hirsh, research professor at the University of Hong Kong, explained how this poses a challenge: “For many people not having a car would lead to a reduction in quality of life. This issue is particularly relevant for those living on the outskirts of the city where the public transport network is more limited. This results in a phenomenon referred to as the “last mile problem” - the challenge of connecting transportation hubs with people’s final destination. While this problem persists, cars will remain the dominant mode of transportation.”

For improvements to be made, Max believes that the relationship between the car and the city needs to be reconsidered fundamentally. In order to do this “we need to start by looking at people’s desires and needs - rather than telling people how they should live. We should look at how they are living and ask them if they necessarily need a car to achieve these different tasks.” In his opinion, providing cheaper and more convenient alternatives is the solution to changing people’s behaviour. Innovations in e-commerce and logistics could play an important role. For instance, home delivery services and airport luggage collection would provide people with an alternative to transporting heavy items themselves, therefore reducing the reliance on the car.

The City of Amsterdam is already taking steps towards reducing car dependence by investigating and implementing cleaner and smarter mobility options. Sharon Dijksma, Deputy Mayor for Traffic, Transport, Water and Air Quality, explained the city’s plans for the coming years. “We want more space and better air quality, therefore it is necessary to reduce the space for cars in the city in favour of cyclists, pedestrians and other modes of transport. In order to achieve this, a variety of new concepts are being tested. For example, in many neighbourhoods “eBuurthubs” will be developed together with residents. These are places where different types of sustainable mobility will be clustered, allowing alternatives to private car ownership (such as e-bikes and shared cars) to become more accessible.” 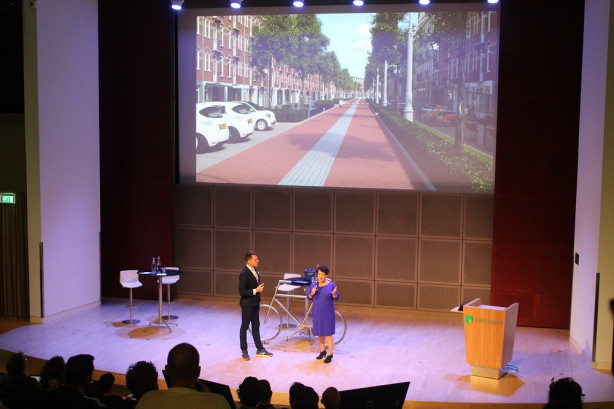 In addition, the city has conducted research into the feasibility of becoming less car dependent. A so-called “travel test” was conducted, in which 70 people handed in their car keys in exchange for a budget to spend on alternative modes of transport. Diederik Basta from Amsterdam’s CTO Office and Marije van Gent, researcher at the Hogeschool van Amsterdam, discussed the outcomes of this experiment. Diederik explained that one of the most surprising conclusions was that none of the participants finished the 500 euro budget. Furthermore, one third of the participants decided to give up their car after the experiment. Marije pointed out that most people participating in the study were already considering going car-free. However, the results illustrate that being less car dependent is definitely a feasible option. 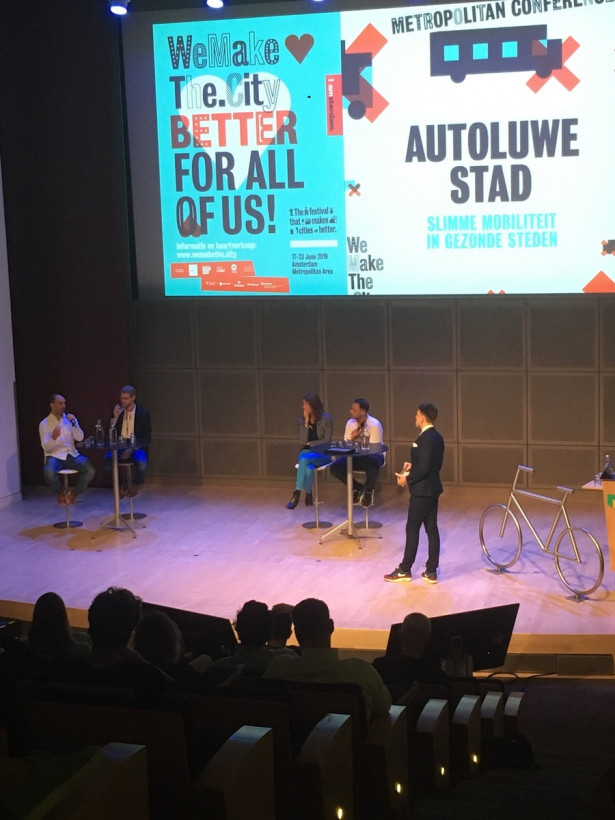 In many cities worldwide, Uber has become one of the companies helping to make car-free alternatives become more feasible. More than just a taxi company, Uber is expanding its services to include sustainable mobility options. Thijs Emondts, general manager of Uber Benelux, presented the company’s new vision. “Ultimately taxis and cars were just the start, the strategy is to become a platform for all forms of mobility”. Ride shares, e-bikes and public transport will all be incorporated into the platform. An entire journey could be made using one app, allowing sustainable alternatives to become easily accessible. This type of service could provide the city with many benefits. Sharon Dijksma was clear to emphasise the importance of policies to regulate new services, particularly in relation to data collection and privacy. “Anyone offering mobility services in the city also needs to be held accountable”.

Of all of the initiatives presented during the conference, one of the most striking was the redevelopment of the Frans Halsbuurt, initiated by residents of the neighbourhood. The Frans Halsbuurt is an area in Amsterdam characterised by narrow streets and many pedestrians and cyclists. Residents put pressure on the local municipality to remove all parking spaces and redesign the public space to create a better living environment. Peter Ulle, senior designer for the project, explained how collaboration with the residents was made a priority and used to establish the starting points for the design. A rough sketch of what the area might look like in 2020: an impressive vision of green public space. It made the audience wonder: is this what the car-free city will look like...? 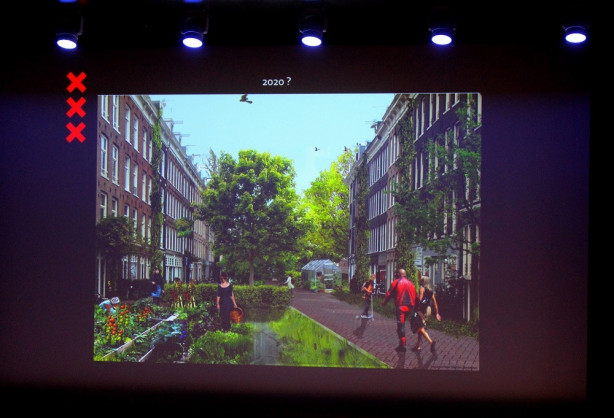 I am Sener Kaya from Turkey. I am a lecturer in Ankara/Turkey. Also I am a PhD student in sociology at Sakarya University. My thesis subject is "The Transformation Revealed by Smart City Applications in Urban Identity: Amsterdam Example".  Because of my thesis, I want to come to the Amsterdam and do interviews with experts who work on smart city. If you accept, I would like to work with you. I am also member of Amsterdam Smart City.
There is no study on smart cities in the field of sociology in Turkey yet. If I finish my thesis successfully, it will be the first study. I would be very happy if you support me in this matter.

My thesis's main question is '' What kind of change/transformation do smart city applications reveal in urban identity?''.

Today, many smart city applications are made by local governments. What kind of a transformation do these studies reveal in the economic, physical and socio-cultural identity of the city that it has carried from the past to the present? How do these studies carried out by local governments respond to the social problems of individuals living in the city?These are some of the sub-questions in my research. When I decided to study this topic I noticed that smart city studies generally are about physical or economic dimensions, especially in Turkey. But In studies in Turkey, this issue has almost never been addressed with its social dimensions. Therefore, I decided that this issue should be studied. Because all the elements that make up the identity of the city should be taken into account in order for the studies to be put forward by the local governments to be holistic. This is why I chose the city of Amsterdam as an example. While the work done in the city of Amsterdam was done from the top to down in the past, the work done today is done from the bottom to up and the people are at the center. I would like to come to Amsterdam and have interviews with people and institutions working on this subject. I am waiting for good news from all of you. I hope someone else accept to work with me.

While it’s easy to find Gorillas, Getir, Flink, and Zapp flash delivery services in iTunes or Google Play app stores, It’s not so easy to locate these many grocery depots in Amsterdam.

In this interactive map we located the many physical locations of these dark stores to see the saturated landscape of flitsbezorging (flash delivery) infrastructure in Amsterdam. The goal of the map is to help consumers choose delivery services based on proximity to homes / businesses and help calm some inner city bike routes!

Curious to see the 10minute cycle zones or the locations of the many dark stores in Amsterdam? Check out this map and more information about dark stores here.