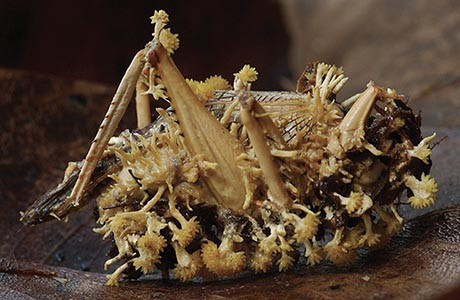 The speakers at this public event will talk about fungal threats and possible solutions.

'We are losing biodiversity on a massive scale due to emerging fungal infections', Professor Matthew Fisher states. He is one of three speakers at this public evening ‘Fungal Catastrophes’ taking place at the opening of a three days international mycological symposium ‘Rise of the Fungi’. The public evening coincides with the 50th International Earth Day focusing on the protection of our environment.

The speakers at this public event will talk about fungal threats and possible solutions. Amphibians are under severe threat by fungal diseases, caused by human intervention. Bat white nose syndrome is ‘burning across North America’, and at a global scale also plants, trees and crops die due to fungal infections. The number of fungal infections in humans are rising too, often accompied with the worrisome emergence of antifungal resistance.

The massive death in amphibians is mainly caused by humans dispersing fungi and by fungal resistance against fungicides. An additional factor is the scarcity of effective fungicides that can be safely used and, related to that, the widespread use of antifungals in agriculture and industry. Furthermore, fungi and humans are more related than one would think, which often hinders the development of new antifungal drugs.

Three speakers, three topics: Amphibians, Bananas, and Humans, all threatened by resistant fungi. Come and learn about this battle.

Hello! Was this session recorded by any chance? Sounds really interesting but I couldn't watch last night.