News by Hannah de Bruijn , Communication at Waag .
Posted on May 9th 2018

Gambling with your private data 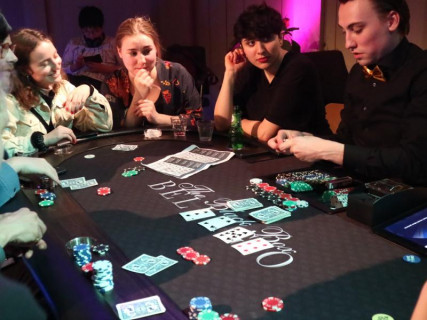 Taking a chance with your private data? Might not seem like the best idea at first thought. Still, it is something we encounter every day. With the recent controversies surrounding facebook, personal data and privacy are more relevant than ever..

In April the Black Box Bellagio was organised at Waag in collaboration with Roos Groothuizen, as part of the DECODE project. The Black Box Bellagio is a privacy casino - you don’t bet with your money but use your private data as currency instead. Three classic games could be played this evening: roulette, blackjack and poker. All with a twist involving private data. The Waag looked like a proper casino, with tables to play the games, casino equipment, and neon lights decorating the room. To finish it all off, there was even live music, played by a duo aptly called Data Sinatra.

The privacy casino
The three games part of this casino are all designed to evoke critical thinking about privacy and how we deal with personal data in our everyday life. Chance is manipulated in the roulette game, similar to how insurance companies deal with chance in real life. Boxes are blocked off based on personal identifiers such as age and address, data also used to define insurance policies. At the blackjack table, people take a chance with their facebook likes - losing to the house means having to like a random facebook page. At the poker table, data can be traded for advantages in the game. A randomised wheel decides your fate. It’s a risk, but one that many people were willing to take.

Voluntarily giving up data
What’s interesting is how readily people are prepared to provide their private data to play a game in this casino setting. Many people have become much more aware of their privacy and what happens to their personal data recently. At this casino though, caution is thrown to the wind as participating in the games takes priority over the risk of exposure. Giving up personal data seems to be easier when there’s something to gain. Or perhaps it’s just the fun and relaxed setting that makes it easier to share. In the end it all boils down to one question… how far are you prepared to go to win the game?

Want to take a chance yourself?
On 18 May, Waag will organize another edition of the Black Box Bellagio, now in De Nieuwe Anita. More information about this event can be found here: https://amsterdamsmartcity.com/events/black-box-bellagio-q3jzd5pt

Data Dilemmas is a collaboration between Amsterdam Smart City and the City of Amsterdam’s Data Lab. During Data Dilemmas, we explore the possibilities for using data and new technologies to address urban and societal challenges, with a focus on responsible digitalization. The goal is to use data to make cities more safe, clean and accessible. But what happens to all the data that is collected? Which dilemmas do we encounter when we collect (personal) data to improve the city? These questions are important for everyone: governments, knowledge institutions, companies, and civil society. In the latest edition of Data Dilemmas, hosted on the 29th of September 2022, we invited Joep Meindertsma, Tom van Arman and Jan van Boesschoeten to take us through the experiences, dilemmas and lessons learned from the Amsterdam Data Exchange (AMdEX) initiative. Marit Hoefsloot from Waag gave a critical reflection on the presented Data Dilemmas.

Joep Meindertsma (Dexes) – Introduction to AMdEX
AMdEX is a collaboration between the Amsterdam Economic Board, AMS-IX, Dexes, the University of Amsterdam and Surf. AMdEX aims to give people more control over their data through a secure, trusted and neutral infrastructure which enables sharing data under specific conditions. AMdEX has two missions: give people more control over their data and make it more attractive to share data. These two missions are a data dilemma in itself.

Data exchange is currently monopolized by a handful of major players and the web is more centralized than ever before. The direct connections between people and organisations have become fewer. This is because we’re increasingly using middle-men, services between the data source and the user. Joep explains: “If you want to see someone’s vacation photos, you have to send a request to Facebook. Facebook owns the data, decides who can access it and dictates what the app looks like”. This problem is not limited to vacation photos or Facebook. It is about all our data. Almost all services are middle-men, with its own closed way of data sharing. This creates data silos – places where data is effectively locked away.

Joep refers to three types of data: “data we want to share, data we don’t want to share, and data we might want to share.” This ‘might share’ category often contains valuable data, but it can be costly or difficult to share. Set conditions makes sharing this data easier. AMdEX makes this possible through a few software projects they’re currently building: eFlint (a new language to describe legal constructs), DexPod (an open source personal data server) and Atomic Data (a specification and open source software to improve data interoperability).

Tom van Arman (Tapp) - AMdEX case study: Marineterrein Sensor Data
Meanwhile, the Marineterrein in Amsterdam is full of sensors, collecting all kinds of data. Think of MicroLAN measuring the water quality, or Public Eye collecting crowd data. Marineterrein is a ‘living lab’, where technologies that contribute to a sustainable and future-proof city can be tested. Together with AMdEX, Tom looked at how the collected data can be made accessible to third parties, such as researchers, journalists, students, artists and entrepreneurs. The Marineterrein and the data collectors, for example Public Eye, set conditions for the data to be used. Tom describes how this works in practice: “If a journalist is interested in using crowd data collected by Public Eye, they must be a member of the Marineterrein community and subscribed to AMdEX. If the journalists meets these requirements, they will receive an AMdEX email with a data download link.”

Jan van Boesschoeten (AMS-IX) - The Future of AMdEX
As Joep and Tom already mentioned, there are many questions around data: who owns the data, what are you allowed to do with it? How do you work together with your competitors to get more value out of your data? A data exchange can be a solution to these questions. This is why AMS-IX, a neutral member-based association that operates multiple interconnection platforms, is connected to AMdEX. Jan shortly describes the future of the AMdEX initiative. The field lab with use cases ends in June 2023, and at that time AMdEX also aims to be a legal entity. Additionally, one of their use cases involving KLM will be presented at AMS-IX’s MORE-IP community event in June. After that, AMdEX will onboard new use cases.

Marit Hoefsloot (Waag) – A critical reflection on the Dilemmas encountered in AMdEX
Last but not least, Marit Hoefsloot from Waag reflects on the dilemma’s presented by Joep, Tom and Jan. Marit describes that the use of data is often seen as an act of notion, whilst privacy is more of a passive notion (not using the data at all). However, it’s possible to use data whilst also protecting ones privacy. A good example of this is IRMA, a privacy-friendly digital wallet which can be used for authentication. As Marit pleads: “Data usage and privacy are not necessarily contradictory, it is about both.” Organisations should see protecting privacy as their own responsibility, instead of giving the illusion of consent with an opt-in or opt-out option.

The second dilemma Marit reflects on is about developer productivity vs. standardisation. Standardisation takes a lot of time, which takes away from innovation and productivity. However, you need standardisation to develop these kind of exchange platforms, as there are many organisations that are involved. Marit describes that the real questions we should talk about are: what is the flexibility of the standard? Do we create the standard together, or more top-down through legislation? Who are we standardizing for? “We should prioritise standardisation, but do it in an open and inclusive way.”

Would you like to join our next Data Dilemmas at Datalab? The upcoming session is scheduled on the 8th of December (topic and speakers to be announced). Keep an eye out on our platform for the programme!