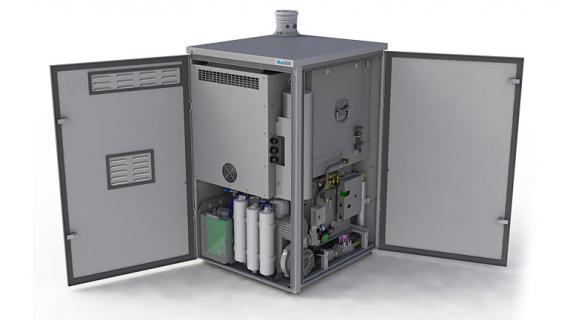 The purpose of the implementation of the fuel cell technology in the centre of Amsterdam is to learn more about the technology, its implementation, and its performance: this is a true Proof of Concept.

Mattijs Guichelaar, projectmanager Cool Endeavour, says: “Now we can show the weekly stream of visitorsaround the world real state-of-the-art technology next to the lighting andsmart displays!”

Frank Obernitz, director business development CFCL, says: “This consortiumreally is the Dutch Dream Team. The partners in the consortium supplement oneanother perfectly and share an excellent vision in the field of sustainablelocal energy generation”.

Introducing a 21st century technology in a 17th century monument building will reduce CO2 emissions by 50%. Using this innovative local energy generation technology will enable the building to provide its own electricity.

Why?
After almost 20 years of research and development in Australia, fuel cell producer Ceramic Fuel Cells Limited (CFCL) has succeeded in creating a fuel cell with a higher electrical yield than the most modern gas-fired power stations existing today. The fact that the residual heat is also utilized for other purposes means that the system is able to realize a 50% reduction in CO2 emissions (compared to average CO2 emissions/kWh in The Netherlands). The fuel cell is currently being tested in nine locations around the world.

Fuel cell technology is quite a broad field that requires experience from many different disciplines: from chemistry to material sciences and all the way through to engineering and thermodynamics. Because fuel cells are very efficient and do not burn the fuel through a combustion process, the fuel cells do not produce large quantities of greenhouse gases, such as Carbon Dioxide (CO2), Methane (CH4) and Nitrogen Oxide (NOx). The only emissions from fuel cells are water, in the form of steam, and low levels of carbon dioxide. Local companies Coolendeavour, Eneco, GasTerra and Liander believe this to be a promising technology and have jointly decided to conduct a Proof of Concept in the Amsterdam inner city with a 2kW fuel cell supplied by CFCL. In other words, not in a laboratory, but in a 'living lab' environment. The proof of concept will fully supply the "De Groene Bocht" building with self-generated electricity. The system is designed to generate power on the user location, which means that it also saves approximately 5% of the normal transport loss. The use of residual heat results in a total energy saving of 85%.

The purpose of the implementation of the fuel cell technology in the centre of Amsterdam is to learn more about the technology, its implementation, and its performance: this is a true Proof of Concept. A secondary purpose of the proof of concept is the investigation of the regulatory framework and recommendations for optimizing those regulations that make fuel cell technology economically viable. During the two year trial period, the performance of the fuel cell will be monitored and experience will be gained in implementing this technology. Amsterdam Smart City supports the organisation with the implementation of this pilot.

One of the activities that will take place, besides monitoring the system, is to check whether it would be possible to introduce the technology to the market on a larger scale. To prepare this large scale market introduction the specific knowledge on service and support will be transferred during this project.

It took more than six months to set up a suitable consortium consisting of a number of different partners with a shared interest that transcended their individual interests. It transpired that the six-month period was needed for the group to be able to concretize the idea, the partnership, the role division, and potential follow-up steps.

For my master degree in engineering, I am looking for an internship in the smart grids or smart buildings fields. It will start in April 2021 and last 4 to 5 months. My subjects of study are energy (electricity, Heat transfer, renewable energies) and IT (programming, embedded systems, IOT). I want to use my skills to help your community on any project related to energy. I'm particularly interested in programming and IOT.
Currently, I'm working on a smart street light network project. The idea is to design energy efficient street lights that communicate with one another and prevent night time disorders by recording any noise over a given threshold and pushing the data to a supervisor.
Feel free to contact me if you need any further informations.
Warm regards,
Aymeric