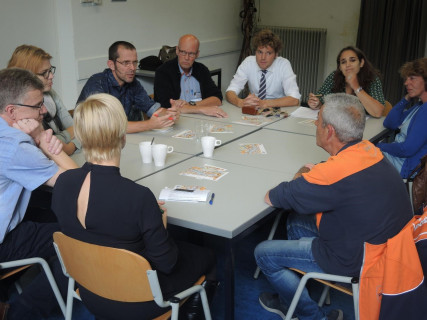 The knowledge network CROW organized a meeting on measuring public opinion on the public space. How do you ensure that people feel comfortable there? PostNL mail deliverers Geerly and Ton and team leader Albert shared their experiences in the different pilots of PostNL with the participants – all professionals in the work field of public sphere management - in the meeting.

The knowledge network CROW organized a meeting on measuring public opinion in the public space. How do you ensure that people feel comfortable there? PostNL mail deliverers Geerly and Ton and team leader Albert shared their experiences in the different pilots of PostNL with the participants – all professionals in the work field of public sphere management - in the meeting.

The meeting participants were particularly interested in the various PostNL projects in managing public space. For example, photographing weeds or litter, or taking interviews with residents. The participants wanted to know what kind of information the postman can give. Geerly: "I see more potential than before I came to this meeting. People were genuinely interested and looking for new resources. The advantage that we already have 22.000 mailmen, every day of the week in every street, is bigger than I imagined before I attended the meeting."

An impression of the conversation

The participants are policy officials of the municipality, representatives of service providers, consultants and designers. They had several questions for Geerly, Ton and Albert:

• How does the mailman combine the added services with delivering the mail? Ton: "It is totally not burdensome to do. We divide the extra work over several postmen and everyone carries out the tasks in his own district, it is a piece of cake..." Team leader Albert: "Postmen respond positively. Of course there are differences, but as soon as the mailmen are involved in a project and start with the extra work, they are very positive about it."

• What are the reactions of local residents when the postmen takes a survey or takes a photo on the street? Geerly: "I run for three years in my neighborhood and I know the people. I ask them simply whether they want to participate in a survey. They are positive, they hope that the municipality does something with the input they give to me. Because I know the people in my district and they know me, it’s easy to ask them some questions." Ton: "For me it is the same. At all spots where I have to take pictures I have been approached by residents. When I tell them that we, for our customer Twente Milieu improve the removal of weeds, people are immediately positive. Moreover, one resident asked me if I could pass on to the message that the road really needs to be improved."

• Would residents be able to reports on the public space? Rogier (yes, that’s me ;-)): "That depends on what the customer wants. I think the mailmen will be capable of having this kind of function, but I can also imagine that municipalities themselves want to have this contact with residents. It is important to know what kind of residents live in a certain district. In districts where residents go to the municipality with their complaints, the added value of the mailman is lower than in districts where residents don't do that.”

Was the meeting useful?

Ton: "This was a very useful meeting. As a mailmen, I now see what issues play a role for municipalities and other agencies. I see that we can be useful in certain subjects, such as the measurement of perception. Furthermore, it was fun and a nice afternoon to have this kind of talks."

This type of reaction also came from the participants of the meeting. When you think about the potential of 22,000 eyes and ears, being on the street for five days a week, with a dedicated smartphone app, then all kinds of ideas come up.

Other blogs of Rogier:

• Having a good webcare team is not being a good government

• How to evaluate Smart City innovation: Wildcard for roundtable on September 14th