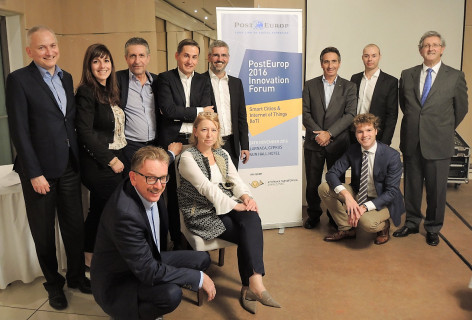 Across Europe, a network of almost one million people (961.529 according to my calculation) is in place to execute smart city activities. This network is present in every street in all European countries almost every day of the week. Ready to measure the quality of the public space, to have an eye on elderly people living alone or to deliver proximity services for companies and consumers.

On November 24, European postal operators gathered together on Cyprus to discuss the potential they can have in the smart city domain. The session was organized by Post Europ, www.posteurop.org. Examples of successful projects from several countries have been presented. PostNL, as a partner of Amsterdam Smart City, presented projects from the Netherlands and explained the added value of the Amsterdam Smart City community.
As a side effect of the meeting, the postal operators realized that their unique networks in their own countries have a huge potential when you combine all those networks on a European scale. A small calculation: Holland has 17 million inhabitants and 22.000 mailmen. Scaling this number up to 743 million inhabitants within the EU brings us to one million mailmen across Europe.

Imagine: a million people with a smartphone measuring the same things across Europe! Wouldn’t that be very interesting – or to put it as I feel it: incredibly awesome?!?

Because the people network is comparable (same kind of work, same kind of people, same kind of technology) it should be easy to scale up smart city initiatives on a European scale. That brings the opportunity to compare, for example, the quality of public spaces in Amsterdam, Paris, Vienna, Berlin and London following the same method and to execute this benchmark in the same period of time.

I’m very enthusiastic to work on this idea. If you have any suggestions or remarks, or examples of Smart City activities of postal operators: please contact me!

Well it all depends on what the desired outcome is. For my work in Portsmouth,UK, I was trying to find a cost effective way to measure air quality and airborne particulates. Our problem was the poor air quality around the schools due to a prevalence of large (typically diesel) vehicles being used to drop the children off in the morning. If we were to try to get parents to understand the health risks for their children then we needed good data to back up any claims we make.
The city doesn't have a budget for this kind of data discovery and only a rudimentary network of environmental sensors on key city buildings. Hence why we were looking to provide small portable sensors that could be carried by city workers or a workforce from an agreeable partner.
For us the traffic enforcement officers are under the control of the city but you are correct in that postal workers would make more sense as they have to travel to every location in the city.
I don't know what the equivalent outcome would be for Amsterdam. I have spent quite a lot of time there and at least in the centre of the city, I don't believe there are as many car journeys used to take the children to school. Maybe you know better though?

Hi David, that sounds very interesting! What are your ideas how to get this done?

I've looked into issuing traffic enforcement officers with these sensors in the past. Using postal workers would be a perfect alternative. https://our.clean.space