WeMakeThe.City festival from the 20th till the 24th of June in Amsterdam. 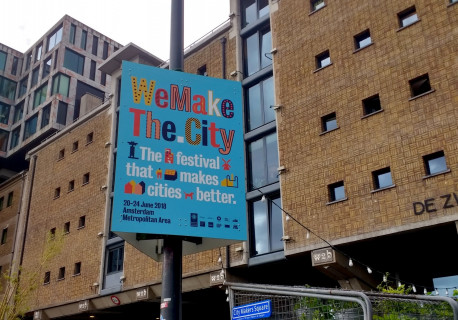 From Wednesday the 20th till Sunday the 24th of June, the first edition of WeMakeThe.City takes place in Amsterdam and the metropolitan area. Five days in a row, thousands of officials, scientists, social professionals, entrepreneurs, designers, artists and above all residents of the city and region work together on solutions for the urgent urban issues of our time. Issues such as climate adaptation, sustainability, healthy aging, affordable housing, mobility, food, crowds in the city and the on-going dichotomy in society. Key question of the festival: in what kind of city do we want to live? Now and in the future. ‘Together we make the city of the future’ is the most important motto of the festival, according to festival director Egbert Fransen. ‘As city of Amsterdam, we won the title of Innovation Capital of Europe 2016-2017 because of the exceptional and innovative way of “making the city together”. With WeMakeThe.City we celebrate this success and we are working on improvement at the same time. The city belongs to us all, so everyone must be involved, participate and feel responsible. At most at a time when our cities are growing wildly, democracy is under pressure and technological developments are causing radical changes’.

Opening by Kate Raworth
Wednesday, June 20th, Kate Raworth, known for her book ‘Donut Economics’, will open the festival. This leading British economist will give her vision on a sustainable city. The ‘State of the Region’ also takes place, in which regional governments, companies, knowledge institutions and cultural organizations present and discuss the state of the Amsterdam Metropolitan Area. Thursday, June 21 is dedicated to various theme conferences, city discussions, films and exhibitions throughout the city and region. Friday, June 22, the dozens of development neighborhoods, the upcoming development areas in the city and the more integrated issues that revolve around them will be discussed. In addition, an exchange of knowledge with a large number of European cities is organized. The weekend of Saturday June 23th and Sunday June 24th is for anyone who wants to enjoy more than 200 exhibitions. In total WeMakeThe.City includes 600 speakers, 150 locations, 25 theme conferences, 30 urban talks, 50 workshops, 30 city expeditions, 15 special events, 10 expos and approximately 30.000 participants. Ticket sales for the festival start in April.